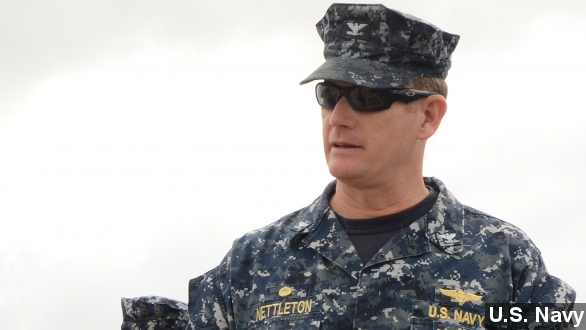 SMS
Navy Commander At Guantanamo Bay Relieved Of Duties
By Mikah Sargent
By Mikah Sargent
January 22, 2015
John Nettleton is relieved of his duties as commanding officer of the U.S. Navy base at Guantanamo pending an investigation into an alleged affair.
SHOW TRANSCRIPT

The U.S Navy says Captain John Nettleton, commanding officer of the U.S. Navy base at Guantanamo Bay, has been relieved of his duties "due to loss of confidence in [his] ability to command."

The Navy declined to provide any further details on the matter in its press release, but media outlets are reporting an alleged affair is at the root of the Navy’s decision.

CNN quotes a U.S. military official who said Nettleton was “engaged in an inappropriate relationship with a civilian.” Adultery is a crime in the military.

The woman’s husband was found dead in Guantanamo Bay on January 11, and the Naval Criminal Investigative Service launched an investigation soon after.

The husband, Christopher Tur, and his wife worked at the Naval base in civilian services. Tur’s wife had reportedly alerted authorities of his absence a day before his body was found.

And Fox News says it was during the NCIS’ investigation into Tur’s death that a connection was found between Nettleton and Tur’s wife.

Nettleton has been reassigned to Navy Region Southeast in Jacksonville, Florida.