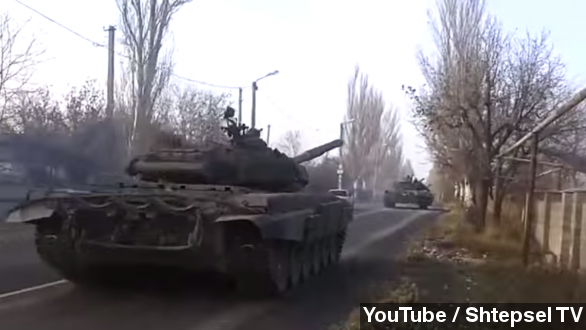 The fragile cease-fire between Ukraine and pro-Russian separatists in the eastern part of the country is threatening to collapse. NATO officials say they've seen more Russian troops streaming across the border.

The claim comes at the same time the Organization for Security and Co-operation in Europe says it spotted a convoy of 43 unmarked green military trucks in Ukraine's eastern region as well. This video supposedly shows a similar convoy earlier in November. (Video via Pravda)

Always seemingly on the defense, a spokesman for Russia's defense ministry has denied the NATO allegations, saying there are no real facts to back them up.

Still, Gen. Breedlove says the cease-fire is essentially "in name only at this point" and that "The violence continues to increase day by day." (Video via NATO)

And a British security source tells CNN, fighting between pro-Russian and Ukrainian forces is as bad as it was before the cease-fire was signed. (Video via YouTube / Novorossia TV)

An analyst for the BBC isn't quite ready to say the cease-fire has collapsed yet, writing instead: "The question now is whether this is just a re-run of events in the summer or does a more significant clash beckon, perhaps one where the Kremlin may decide — in its terms — to teach the Ukrainians a military lesson."

Either way, there's no official word on the status of the cease-fire. According to The Daily Beast, rebels are hoping to have another round of peace talks with the Ukrainian government later this month.