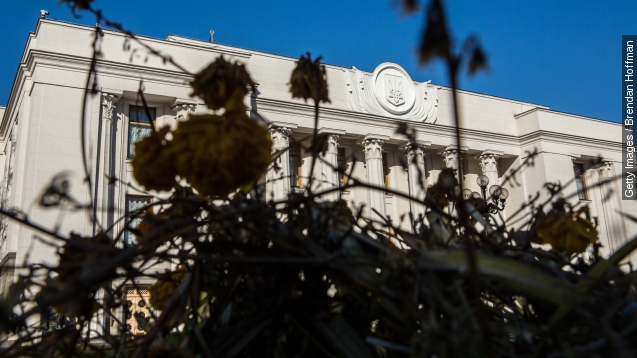 SMS
Nationalist Protests Turn Violent In Kiev
By Eugene Daniels
By Eugene Daniels
August 31, 2015
After the Ukrainian Parliament threw its support behind part of the peace deal, protests erupted and left one soldier dead.
SHOW TRANSCRIPT

Protests in Kiev against a new constitutional amendment backed by the Ukrainian Parliament have left one soldier dead and more than 100 people injured.

The proposed change is part of a peace agreement between Ukraine and Russian-backed separatists and calls for Ukraine's government to give more local control to areas currently held by rebels by the end of the year. (Video via BBC)

Protesters, mostly from nationalist parties, don't want to compromise on anything with rebels and are concerned decentralization would give them too much power. (Video via CNN)

Ukrainian President Petro Poroshenko disputed those claims and called the move a "difficult but logical step toward peace."

Officials say someone threw a grenade at police and soldiers Monday after news spread that the proposal passed its first reading. (Video via RT)

Nearly 7,000 people have died since last March when Russia seized Crimea, causing conflicts in Eastern Ukraine between the country's army and rebels. Multiple ceasefire deals have been signed, but both sides have violated them. (Video via NBC)

The proposal now has to pass a second reading of Parliament before it can be put in place.