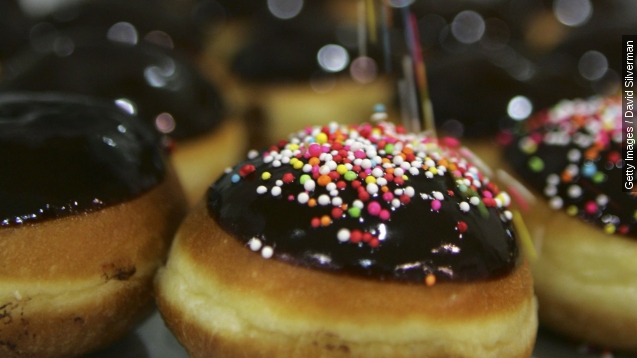 So if there’s any day for you to throw out excuses and stuff your face with fried, sugary goodness … June 5th is it!

It’s no surprise doughnut shops like Krispy Kreme and Dunkin' Donuts are benefiting from this “holey holiday," and both are celebrating with special offers.

But there is, after all, a brief history behind National Doughnut Day. Introduced by The Salvation Army, this day can be traced all the way back to World War I.

According to The Salvation Army, “The doughnut traces its roots to Europe but gained a foothold here when soldiers returned home longing for the treat they were served by Salvation Army doughnut girls, a symbol of motherhood and home.”

And to celebrate those doughnut girls, in 1938 The Salvation Army declared the first Friday in June as National Doughnut Day.

While donuts are pretty tasty, there are tons of days dedicated to food, as you might have noticed.

According to The Wall Street Journal, “Today there are more than 365 national food holidays.”

If you didn’t catch that, there are enough food holidays to fill up the calendar with a little overlap.

And we don’t mean to burst your food-lovin’ bubble, but a lot of these holidays were just made up by this guy, Alabama food writer John-Bryan Hopkins.

He’s also the creator of blog Foodimentary, which lists each food holiday. And back to the overlap — June 5 is also National Ketchup Day.

So doughnuts for breakfast, ketchup and fries for lunch? Yum. Sounds like my kind of day.

And just in case you need to start preparing for the next food holiday: June 7 is National Chocolate Ice Cream Day.

As for the entire month of June, depending on the route you choose, you might also need to sign up for a gym membership — June is the month for candy.

But for the healthier eaters out there, June is also the national month for fresh fruit and vegetables, dairy, iced tea and papaya.

So maybe that will help balance out doughnut and ketchup day.

This video includes images from Getty Images, U.S. Library of Congress, and Tommy Wong / CC BY 2.0.