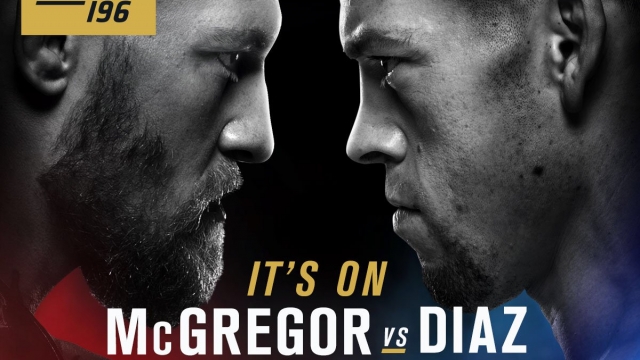 SMS
Nate Diaz Accepts Short-Notice UFC 196 Bout Against Conor McGregor
By Matt Moreno
By Matt Moreno
February 24, 2016
With Rafael dos Anjos out with a broken foot, Diaz accepted the fight about a week and a half prior to the event.
SHOW TRANSCRIPT

It looks like Nate Diaz is getting the fight he so explicitly asked for ... explicitly.

Diaz is replacing an injured Rafael dos Anjos at UFC 196 and will fight featherweight champion Conor McGregor in a non-title fight March 5 in Las Vegas.

"We figured this would be the most exciting fight. It's the fight that Conor really wanted. A lot of people wanted to fight Conor McGregor, but Diaz wanted the fight," UFC president Dana White said on ESPN's "SportsCenter."

McGregor will be jumping up a couple of weight classes for the fight. He won his featherweight title at 145 pounds and was set to fight Dos Anjos at 155. For his fight against Diaz, he'll be debuting at 170.

While Diaz is accepting the fight on short notice, there's definitely been no shortage of trash-talking prior to the event.

The foul-mouthed Diaz dropped an expletive-laden rant at the end of his Dec. 19 fight against Michael Johnson, specifically calling for McGregor to fight him.

And before official word came out on his matchup against McGregor, Diaz fired off this tweet — an obvious shot at a previous tweet from McGregor.

McGregor and Diaz will serve as the main event, with a bantamweight championship fight between Holly Holm and Meisha Tate as the co-main event.

This video includes clips from UFC and CNN, and images from Getty Images.