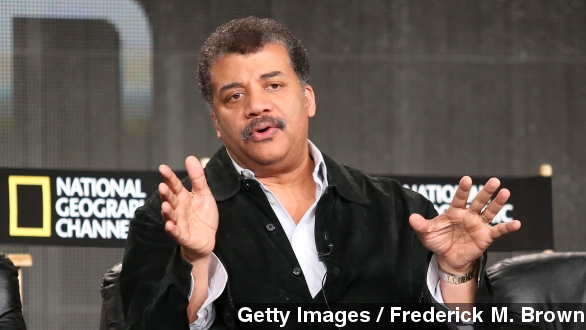 If you're not familiar with Tyson, he's the smart dude who is not Bill Nye who explains science stuff really well — like three dimensions.

"On a grid, you might think of it as what street, in New York, what street, what avenue and what floor on a building you might meet someone." Tyson said.

During the Winter TV Press Tour 2015, Tyson was quoted saying, "This is low risk for National Geographic because it exists as a thriving podcast — it was selected by iTunes as one of Top 10 podcasts of 2014."

That's probably the reason why the National Geographic Channel chose to lean on Tyson's "StarTalk" as their very first late-night series.

"StarTalk" is described on its website as a bridge "between Pop Culture and Science with clarity, humor and passion," so viewers can expect more of the same. Just on television.

"StarTalk" will make its TV debut on the National Geographic Channel in April. It'll be taped in front of a studio audience at the Hayden Planetarium inside the American Museum of Natural History, where Tyson serves as director.