Steve Nash Leaves NBA As One Of The Best Passers Ever 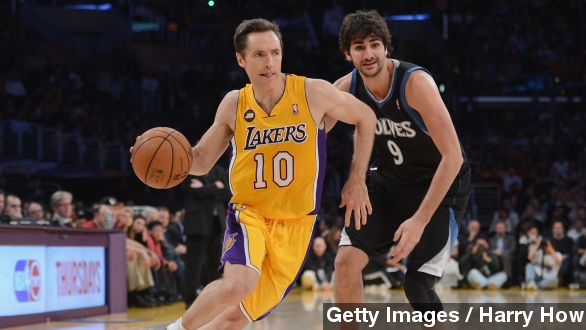 "A lot of people say that an athlete dies twice and in some ways, without being salacious, that's true," Steve Nash told ESPN.

He made the announcement Saturday in an essay on The Players' Tribune, a platform for professional athletes to give insight firsthand. In that essay, Nash reflects on his career and gives thanks to coaches, teammates, family members and friends for helping him along the way.

Nash's impending retirement was already a foregone conclusion — he was ruled out of the 2014-2015 season for the Lakers back in October because of a recurring back injury. Since signing with the Lakers in 2012, he's only played 65 games.

But Nash's injury-plagued final seasons don't speak to how good a player he was during two decades of NBA ball.

The 41-year-old Nash is retiring third on the all-time NBA assists list, behind John Stockton and Jason Kidd. The 2009-2010 season with the Phoenix Suns was the best passing season of his career — he dished out a total of 892 assists.

According to ESPN, he's one of 10 players to win the league's MVP award in back-to-back seasons, and the only player under 6'6" to win multiple MVP awards.

So far, Nash is the only MVP to retire without playing in the NBA Finals. But NBA players, writers and even Arizona Sen. John McCain took time to congratulate Nash on his career.

Nash didn't say exactly what's next for him, but wrote he still has so much to learn, which, in his words, is an "incredible gift."