NASCAR's Stance On The Confederate Flag Is Confusing 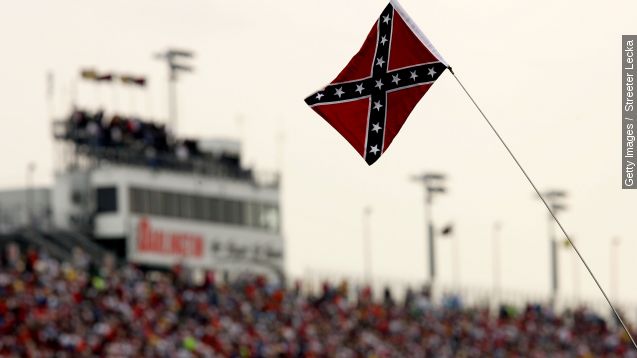 For a sport with a strong Southern following and a symbol with deep Southern routes, NASCAR isn't looking to associate itself with the Confederate flag anytime soon.

NASCAR released a statement detailing its stance on the Confederate flag early last week, saying it supported South Carolina Gov. Nikki Haley's request to have it removed from the state's capitol grounds and the flag wouldn't be allowed "in any official NASCAR capacity."

Since then, some of NASCAR's biggest names have come out supporting the banishment of the Confederate flag at events, including Dale Earnhardt Jr. and Jeff Gordon. Still, Sunday's Sprint Cup race at Sonoma in California could be the first test for NASCAR's noncommittal ban. (Video via Nationwide)

While NASCAR says it banned the use of it a while ago, many fans are still able to display the flag from their campers and vehicles at racing events. That might be what NASCAR is trying to weed out next.

The association didn't exactly commit to if or how fans will be allowed to keep displaying the symbol, mentioning fans have a right to freedom of expression. But HLN reports:

"They're going to ensure that that flag doesn't show up at any of their events including in the campgrounds and infields."

As USA Today points out, "Racetracks are private property, and it's within a business's discretion to disallow certain symbols." So if NASCAR wanted to outright ban them, they ideally could've done so by now.

"Their fan base kind of having a traditionalistic, idealistic approach to the Confederate flag and NASCAR not wanting to step on their toes because of that. I think NASCAR should take a strong stance," Fox Business reports.

Local newspaper The Press Democrat spotted one person wearing the Confederate flag at practice trials over the weekend, but the Sonoma Raceway says it doesn't have a ban on what flags can be displayed.

If NASCAR does want to place a firm ban on the flag, policing it may also be a problem, as races can draw nearly 100,000 fans on average per event.