NASA Visualizes Just How Much Rain We've Endured — Or Missed 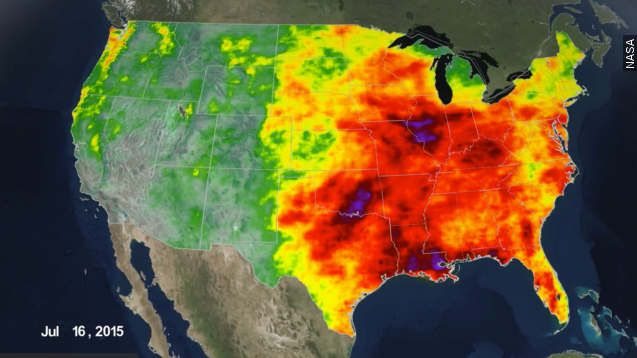 SMS
NASA Visualizes Just How Much Rain We've Endured — Or Missed
By Evan Thomas
By Evan Thomas
July 31, 2015
A NASA composite of nationwide rainfall to date shows parts of the U.S. are underwater, and parts are sorely missing the same.
SHOW TRANSCRIPT

Depending on which part of the country you live in, the rain — or the lack of rain — has been bad this year. Now, NASA has released data showing exactly how much some states are suffering.

NASA just released six months of composite data from its Global Precipitation Measurement mission. The joint operation with Japan’s space agency gathers data from a constellation of rain-tracking satellites around the globe. (Video via NASA)

It shows a harshly divided U.S., where parts of the country got way too much rain, and others didn't get nearly enough. (Video via NASA)

The South Central U.S. got swamped, with as many as 40 inches of rainfall in the first six months of the year. (Video via CNBC)

This year to date, the Dallas-Fort Worth area has seen 32.6 inches of precipitation. That’s more than the annual totals for each of the last 10 years.

Meanwhile, most of the other side of the Rockies has seen less than 20 inches of precipitation all year. California in particular is now looking at a year’s worth of “rain debt.”

Typically, the bursts of moisture that get pushed in off the Pacific Ocean water the region over the course of the wet season. (Video via NASA)

But for the last three years, they’ve been so anemic, California now needs need a year’s worth of precipitation just to get back to its average levels.

There’s a stronger-than-usual El Nino brewing in the equatorial Pacific Ocean, which could bring more rainfall to the state. (Video via KABC)

But NASA researchers say it will take years of higher-than-average precipitation for California to recover.