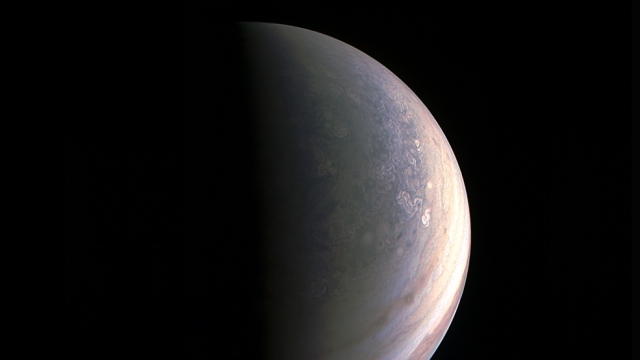 SMS
Photos Of Jupiter's North Pole Give A Glimpse Of What's To Come
By Lindsey Pulse
By Lindsey Pulse
September 3, 2016
Juno launched for Jupiter in 2011. It arrived last month and took some amazing photos.
SHOW TRANSCRIPT

NASA just got the first photos of Jupiter's north pole ever, but that's just the beginning of what the spacecraft missions are going to catch.

The Juno spacecraft launched from Cape Canaveral in August 2011 and arrived at Jupiter last month. And NASA scientists say what Juno caught on camera is unlike anything they've ever seen.

NASA's goal with Juno is to track the evolution of Jupiter. Researchers want to see how the planet was formed and how it's changed over the years.

Jupiter's north pole isn't at all like what we have here on Earth. First, it's blue. It also has a shape vastly different from other gas giants in the solar system. Saturn, for example, has a hexagon of clouds at its north pole.

Juno wasn't just snapping pictures. It was also collecting scientific data, like information on magnetic fields and the planet's southern auroras, the latter of which are impossible to see from Earth.

Juno is scheduled to make about three dozen flybys before the end of its mission in October 2017, so time will tell what other phenomena the spacecraft will catch until then.