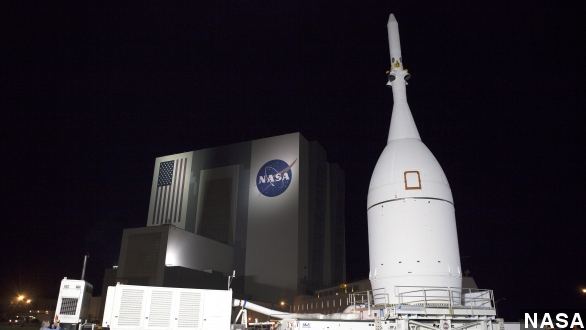 By Steven Sparkman
December 1, 2014
NASA's Orion capsule is preparing to take its first test flight, a major milestone toward sending humans to an asteroid or even to Mars.
SHOW TRANSCRIPT

Now that humanity has put a robot on a comet, you might be wondering when we'll get around to sending some human beings out there in the solar system.

Well, NASA is planning to take a big step in that direction in early December. That's when the Orion spacecraft, seen here beginning its trip to the launchpad, is scheduled to be sent into space for the first time.

"The four-and-a-half-hour flight, called Exploration Flight Test-1, will send Orion 3,600 miles from Earth on a two-orbit flight to confirm its critical systems are ready for the challenges of eventually sending astronauts on deep space missions to an asteroid and Mars."

Orion is the first new human-ready spacecraft NASA has built since the shuttle, and although it's still years away from carrying anyone into space, NASA is hyping this first test launch.

"This is the largest heat shield of its kind ever made!"

The most obvious new feature is the Launch Abort System, that big pointy thing at the top.

In the event a mission has to be aborted — or even if a rocket explodes — Orion detaches and is carried out of harm's way by the Launch Abort System, allowing the crew capsule to parachute back down safely.

But there won't be a crew on board this time around. In fact the first manned mission isn't scheduled until 2021 at the earliest.

SpaceX's Dragon capsule is expected to carry humans into low-Earth orbit years before Orion. So why the hype?

Orion isn't going to low-Earth orbit. December's test flight will take the capsule 15 times farther out from Earth than the orbit of the International Space Station. And when that first manned mission finally does happen, it'll likely be the first time humans have ventured that far from our planet since the final trip to the moon in 1972.

This video includes an image from the European Space Agency.