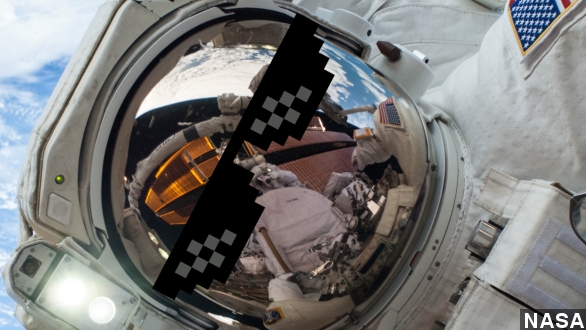 NASA is working on a set of augmented reality glasses for astronauts aboard the International Space Station.

The agency is partnering with Osterhout Design Group, which has been building high-tech glasses for commercial and government use for the past six years.

NASA says the goal is to replace tasks an astronaut might do with a computer — and then some. The glasses can overlay content onto the wearer's environment, everything from step-by-step instructions to live videoconferencing from ground-support teams.

And NASA believes the glasses could be a viable replacement for the old-fashioned paper checklists astronauts turn to in an emergency, especially as the agency lays plans for manned missions beyond low earth orbit.

Bloomberg quotes Sean Carter, an official at NASA's Johnson Space Center: "For us, this is huge today, and it gets even bigger tomorrow. The further we go away from earth, the more we need this."

But before the glasses would head to orbit, they'd go underwater. NASA tests potential new mission tech in its Extreme Environment Mission Operations lab, or NEEMO. It's an undersea habitat that closely resembles the environments founds on the ISS.

That's where training astronauts decided Google Glass wasn't for them: The screen was too small, and it was awkward to scroll through things quickly.

The new glasses would use astronauts' full field of view, instead of keeping all the data in the corner of their vision the way Glass does.

According to Forbes, Osterhout Design Group's glasses will enter testing at NEEMO sometime later this year.