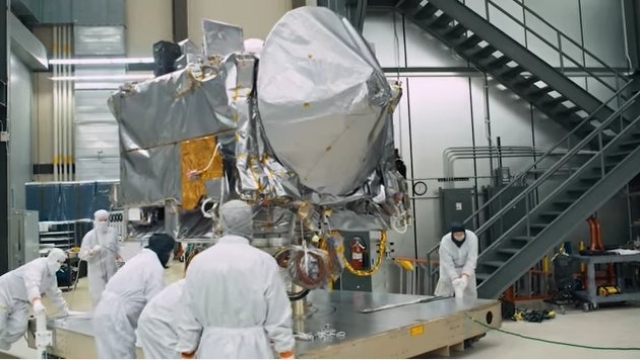 By Ryan Biek
September 6, 2016
The targeted asteroid has a chance of hitting Earth.
SHOW TRANSCRIPT

Not to freak you out, but NASA has a whole list of asteroids it thinks could hit our planet.

The good news is the space agency is going to send a craft to one of them, and for the first time ever, carry a sample of the asteroid back to Earth.

The OSIRIS-REx space probe is set for launch Sept. 8. Its mission is to "bring back 60 grams of pristine carbon-rich material from the surface of [asteroid] Bennu."

Now, how scary can this asteroid be? One of the team's leaders said, "Think of it as a small mountain in space ... that makes occasional close approaches to our planet."

It's going to take two years for OSIRIS-REx to travel to Bennu, and when it does, it'll first map the asteroid and identify what kind of chemicals and minerals are on its surface.

Finally in 2020, the craft will briefly touch down to collect the sample of rocks and dust that NASA's looking for.

Then it just has to get near Earth and eject the sample in a canister with parachutes before it will spend its remaining days revolving around the sun.

OK, so it might not be a simple mission, but if all goes according to plan, it'll lay the foundation for future exploration of asteroids, which were actually some of the first parts of our solar system.

Materials in asteroids could be the ingredients that created life, and it's possible an asteroid –– like Bennu –– supplied the water for our oceans.