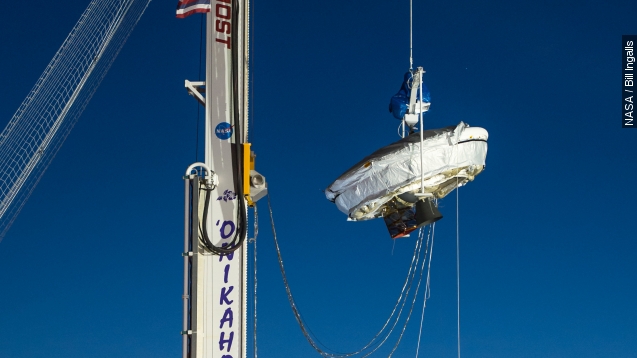 NASA is gearing up for its second flight test of the Low-Density Supersonic Decelerator, or LDSD, because we don't wanna try to say that full name five times fast. But let's just call it what it is — a flying saucer.

The inflatable ring does look a bit like pop culture’s idea of an alien spacecraft, but it serves a very real purpose: NASA wants to use it to help slow down probes on their way to the surface of Mars. (Video via NASA)

NASA had originally scheduled a Tuesday test, but has since postponed it to Thursday due to rough seas that could complicate splashdown and recovery efforts.

This week’s test will run just like last year’s. Balloons and rockets will carry the LDSD to 180,000 feet and more than three times the speed of sound, where it will inflate to slow itself down for a parachute-assisted water landing.

Despite the parachute not deploying as intended, NASA got all sorts of data and called the test a success.

Since then, NASA has redesigned the chute to perform better, but as probes get heavier we’re reaching the limits of what they’re capable of. That’s what the LDSD test is about. (Video via NASA)

Current probes enter the Martian atmosphere at speeds in excess of 12,000 mph. Atmospheric drag — whether by inflatable ring or traditional parachute — is the most efficient way to slow them down. (Video via NASA)

Jet Propulsion Laboratory principal investigator Ian Clark said "We've been using the same parachutes for several decades now. If we want to eventually land a human on the surface of Mars, we realized we need to develop new technologies."

And to that end, LDSD is just a stepping stone. It could enable safe deliveries of probe payloads twice the weight of the 1,982 pound Curiosity, and to higher-altitude sites on Mars.

But human-scale missions will need more slowing power than LDSD can provide. One research paper suggests such missions need to land single payloads as heavy as 80 tons.

NASA’s plans don’t call for humans on Mars until the 2030s, though, so for now it has time to test the smaller-scale stuff.

The LDSD launch window runs through June 12, in the event seas are still rough on Thursday.