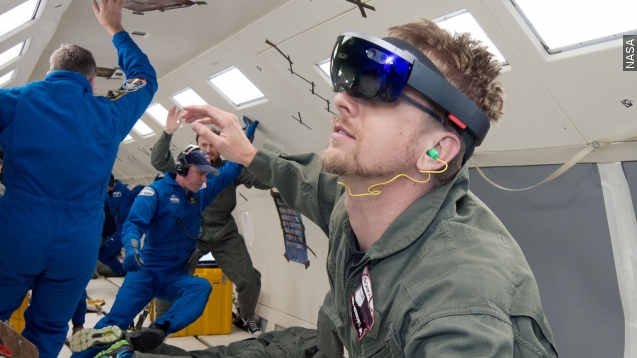 NASA Astronauts are getting one of the first cracks at Microsoft’s Hololens augmented reality headsets.

They’ll test the gadgets aboard the International Space Station as part of Project Sidekick, a program intended to increase task efficiency and reduce training time for astronauts on assignment. (Video via NASA)

Hololens can operate in remote expert mode, which connects a controller on Earth via Skype, who can see what the wearer sees through Hololens’ cameras. (Video via Microsoft)

Or in procedure mode, which uses local instructions and animations. NASA says this mode could be especially useful for long-duration missions away from the planet, where real-time video communication is less feasible. (Video via NASA)

NASA will run another set of Hololens tests during NEEMO expedition 21, aboard the underwater habitat NASA uses to replicate spacelike conditions. (Video via NASA)

If this sounds familiar, it’s because NASA has something of a fixation on augmented reality headsets.

Hololens offers a fuller field of view, at least. Testing will begin when two headsets launch aboard SpaceX’s next planned resupply mission to the ISS, on June 28. (Video via SpaceX)