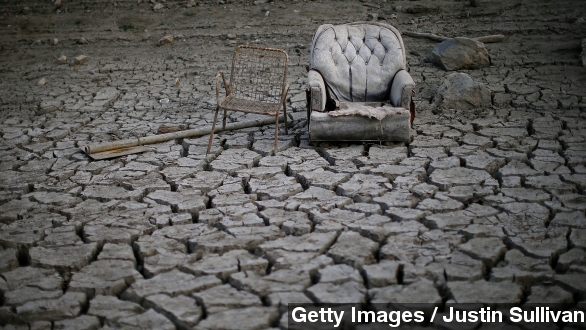 SMS
NASA Scientist Says One Year Left Of Calif. Water Supply
By Jasmine Bailey
By Jasmine Bailey
March 14, 2015
According to a NASA scientist, California only has one year left in its water reserves and residents need to start rationing now.
SHOW TRANSCRIPT

Californians — if you're not taking the drought seriously, a new op-ed by a NASA scientist in the Los Angeles Times makes some shocking revelations.

"We're not just up a creek without a paddle in California, we're losing the creek too." That's from Jay Famigelietti, the senior water scientist for NASA's Jet Propulsion Laboratory/Caltech. He claims there's only about a year's worth of water supplies left in the state.

Just take a look at this water gage from The Metropolitan Water District of Southern California — 2014 alone did a lot of damage on the state's water supply with it being the hottest year on record for California.

And the winter didn't help. With snowfall making a miniscule dent, this past January was the driest for the state since record keeping began in 1895.

The Weather Channel explains, "There's not much snow on the Sierra. ... for this time of the year we're actually running ... only about 18 percent, one-fifth, the snow fall you'd expect. ... We really have to hope we can get some more rain in there."

​Other than the obvious lack of precipitation, farmers are also being blamed for much of the dwindling water supply. According to Famigelietti, "Farmers have little choice but to pump more groundwater during droughts, especially when their surface water allocations have been slashed 80% to 100%. But these pumping rates are excessive and unsustainable."

But The Sacramento Bee reports some farmers are willing to give up a portion of their crops to sell water to the Metropolitan area. The price being offered for one of our most precious natural resources highlights just how severe the shortage is. Rice farmers in Sacramento Valley will be paid about $700 an acre-foot, which is about 326,000 gallons or a year's worth of water for just two households. Compare that to last year's $500 an acre-foot price tag.

Famigelietti did make a few recommendations as to how Californians can better combat the growing problem, including "immediate mandatory water rationing."

KXTV talked to Famigelietti who said, "In the home those of us who water the grass should consider getting rid of the lawns and planting ... native landscaping.

Other recommendations include implementing a task force, encouraging "the public [to] take ownership of this issue," and accelerating "the implementation of the Sustainable Groundwater Management Act of 2014."

"The act requires the formation of local groundwater sustainability agencies (GSAs) that must assess conditions in their local water basins and adopt locally-based management plans." The act allows for a 20-year implementation period after the agencies create a plan. But if NASA's predictions are true, by then "there may be no groundwater left to sustain."

"All of this news comes as the state water resources control board is considering tighter regulations or restrictions state-wide," KRON reports.

One board member told KTVU, "We are looking at some new prohibitions also, to make sure restaurants aren't serving water unless the customers are requesting it, the hotels and the motels are giving guests the options of not having their sheets and towels laundered."

Another possible new rule from the board, whose members call the situation "dire," includes enforcing a fine for residents who over water their lawns. Those fines could be up to $500.

On the upside, results from a recent Field Poll found 94% of Californians support implementing mandatory regulations on water use.