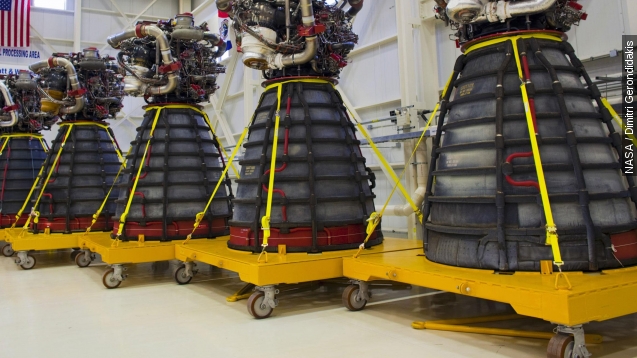 SMS
NASA's Shuttle-Era Engines Have One Last Job
By Evan Thomas
By Evan Thomas
August 15, 2015
NASA will use the last of its Shuttle-tested RS-25 engines to launch the first Space Launch System flights.
SHOW TRANSCRIPT

If it isn’t broken, don’t fix it. That’s the mentality at NASA, which is test-firing the RS-25 rocket engines that will serve as the main engines for the Space Launch System. (Video via NASA)

These are the same engines that powered the Space Shuttles — literally. The design has proved so reliable NASA has been refurbishing and reusing the same rockets for 34 years. Of the 16 RS-25s standing by for SLS duty, 14 of them have already been to space. (Video via NASA)

Aerojet Rocketdyne developed the RS-25 in the 1970s. During their first manned flight in 1981 and for every shuttle flight since, three of them helped launch the orbiter away from Earth’s gravity. (Video via NASA)

Each one cranks out more than 400,000 pounds of thrust at sea level, and runs for more than six minutes during launch on a mixture of liquid hydrogen and liquid oxygen. They’re the most efficient engines of their kind, even with that fuel economy.

And with a couple upgrades, including a modernized engine controller, they’re good enough for the next generation of launch vehicles.

All the testing is to make sure they’ll perform at the higher temperatures and pressures the SLS will require. It will be heavier — and move faster — than the Space Shuttle. (Video via NASA)

Also worth noting: the SLS core stage is designed to be disposable, as opposed to the Shuttle orbiters that returned to runways. An SLS launch is the last time any RS-25 will be reused. (Video via NASA)

Plans call for new RS-25E variants that will be disposable from the start, using more efficient modern manufacturing methods to make them cost-effective. (Video via NASA)

Until then, though, the old guard has a few more missions to launch. NASA will start testing the last of its old RS-25s for flight readiness at the Stennis Space Center this fall. (Video via NASA)

This video includes images from NASA and music by Birocratic / CC BY ND 3.0.