NASA's On Course To Take Pluto's Best Photo Ever 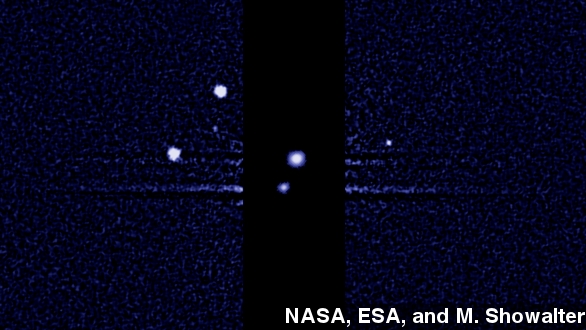 The probe has been on its journey for more than nine years now. It's close to three billion miles away from Earth, and a cool 160 million miles from Pluto, which it will reach in July.

But the probe, which was launched in January 2006, started taking pictures Sunday with its long-range camera that will help navigators make sure New Horizons is on course to pass the dwarf planet. (Video via NASA)

That's because the probe is moving so fast, it won't be able to enter Pluto's orbit and will only be able to do a flyby, taking a wide range of measurements and snapping the best picture of Pluto ever taken.

Even though it's been 85 years since Clyde Tombaugh discovered Pluto, we aren't really sure exactly what the surface is going to look like, despite all we know about the dwarf planet.

Right now, this is the best picture we have of Pluto. That bright blob in the middle is Pluto, and that slightly smaller blob down beneath it is its biggest moon, Charon.

As The Planetary Society explains, the reason we have trouble photographing Pluto — while we can get clear photographs of galaxies millions of light years away — is that Pluto, which is just a few light hours, is tiny compared to those galaxies.

In fact, Pluto is a little smaller than our moon, and, at its closest, it's 2.6 billion miles away from us, hence the trouble snapping a photo, and the significance of New Horizon's mission. (Video via NASA)

New Horizons will finish taking its measurements of Pluto this year, and NASA expects the data by fall of 2016.