NASA’s MESSENGER Mercury Mission Is About To Crash Land 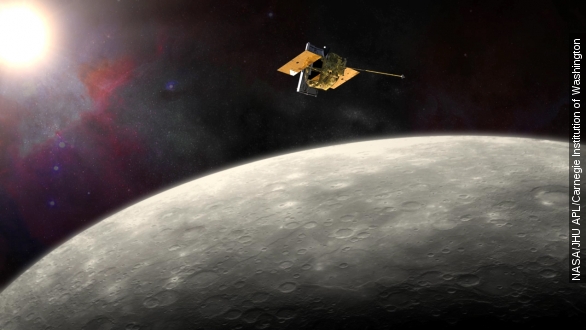 SMS
NASA’s MESSENGER Mercury Mission Is About To Crash Land
By Evan Thomas
By Evan Thomas
April 17, 2015
Rest in pieces, MESSENGER, knowing you gave us most of what we know about Mercury before you ran out of fuel and slammed into its surface at 8,750mph.
SHOW TRANSCRIPT

NASA is about to lose a space probe.

MESSENGER, or MErcury Surface, Space ENvironment, GEochemistry, and Ranging, was the first dedicated space probe for Mercury, the closest planet to our sun. It started orbiting in March of 2011.

Now, it’s almost out of the helium fuel it uses to hold its line against the gravity of Mercury and the sun. NASA says after one last correction burn on Friday, April 24, MESSENGER's demise will be just a matter of time.

And speed. MESSENGER will be doing 8,750mph when it spirals into Mercury's surface. The impact is expected to be on the far side of the planet, hidden from the view of Earth.

And yes, Mercury's minimal atmosphere means MESSENGER actually will hit the surface, instead of burning up.

"Rest in pieces" seems a suitable epitaph, considering the spacecraft will be ramming the planet at Mach 12. But the focus was always on the science. John Grunsfeld, with NASA's Science Mission Directorate, elaborates:

"We are celebrating MESSENGER as more than a successful mission. It’s the beginning of a longer journey to analyze the data that reveals all the scientific mysteries of Mercury."

In 2012, it found evidence of frozen water and organic materials at Mercury’s poles: enough to cover Washington state in ice more than two miles deep.

MESSENGER also helped develop and test heat-shield technologies. On the sunny side of Mercury, temperatures climb past 570 degrees fahrenheit. NASA says the ceramic cloth coverings it used to keep MESSENGER’s instruments from cooking will be useful on later missions to other planets.

We humans won’t leave Mercury alone for long: European and Japanese space agencies are planning new Mercury-orbiting probes, to launch in January of 2017.