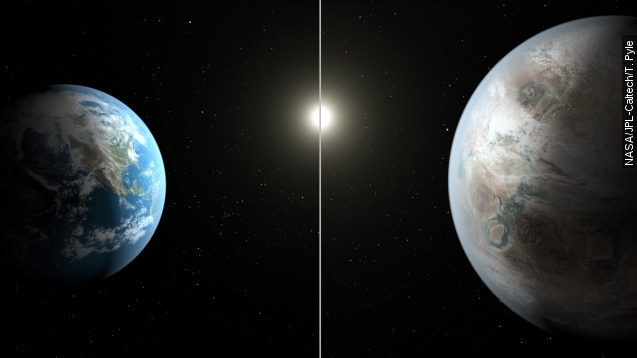 SMS
NASA's Kepler Peers Into Space, Uncovers Earth-Like Planet
By Ryan Biek
By Ryan Biek
July 23, 2015
NASA's Kepler Mission is searching for life on other planets, and it recently discovered a promising lead that's the most Earth-like yet.
SHOW TRANSCRIPT

Are we alone in the universe? To answer that, NASA's Kepler space program has searched the cosmos for planets like ours. On July 23, they announced they'd discovered "Earth 2.0."

They call it Kepler-452b. It's close to the same size as Earth and revolves around a star that's roughly the same surface temperature as our sun. But this star is older, thus 20 percent brighter than the sun, and Kepler 452-b orbits it every 385 days.

Now, this isn't the program's first discovery of a potentially habitable planet, but it's the most like Earth yet. Its star and our sun release the same amount of energy. And the new planet's distance from its star matches that of the Earth and the sun.

Alright, let's get back to the basics. Think of the Kepler spacecraft as a roaming telescope.

Its mission is to search the Milky Way Galaxy for planets one-half to two times the size of Earth, revolving around their stars' "habitable zones" — more on that in a bit.

The probe estimates a planet's size by calculating how much light is blocked from our view when it crosses its star. And the time it takes a planet to cross helps us estimate the size of its orbit.

Since evolutionary theory says life on Earth began in water, finding oceans on other planets is the next logical step.

Planets' distances from their stars have to be just right. Too close, and the water is a gas. Too far, and it's ice. Researchers call it the habitable zone, or "Goldilocks Zone."

In 2011, the Kepler mission confirmed its first potentially habitable planet, revolving around a star similar to the sun, at the perfect distance for liquid water. But having the potential for life doesn't mean a planet does.

Mainly because liquid water isn't the only thing needed for life. Space.com's recipe for a habitable planet gives us a good idea of the delicate balance of what's required.

So you can see why Kepler's new findings are so exciting, but until more details are discovered, Earth is still one of a kind.

This video includes images from NASA and PhOtOnQuAnTiQuE / CC BY NC ND 2.0.