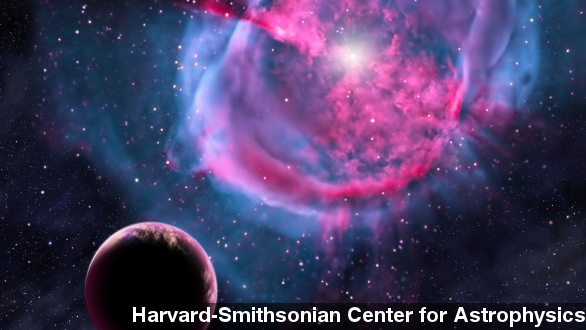 SMS
NASA's Kepler Finds 2 Most Earth-Like Planets To Date
By Cliff Judy
By Cliff Judy
January 7, 2015
While the eight planet discoveries announced Tuesday are in the habitable range, two are considered the most Earth-like found to date.
SHOW TRANSCRIPT

This planet, spotted by the Kepler spacecraft, might be one of the most Earth-like planets ever found by NASA. The space agency announced eight newly found planets in habitable zones where liquid water could exist on the planet's surface, two of those being "the most similar to Earth of any known exoplanets to date." Yes, we know NASA's said that before.

But Kepler's whole mission is, after all, to find Earth-like planets. The eight announced Tuesday at the American Astronomical Society's winter meeting in Seattle brought Kepler's number of confirmed exoplanets discovered to more than 1,000. (Video via NASA)

NASA launched Kepler in 2009, and the spacecraft detects possible planets by monitoring starlight. If something moves in front of a star and dims what Kepler can see, it could be an orbiting planet. (Video via NASA)

The two planets scientists hailed the most Earth-like ever found are Kepler-438b and Kepler-442b.

Kepler-438b is only 12 percent bigger than Earth and circles its star every 35 days. Kepler-442b is a third larger than Earth and makes an orbit every 112 days. That sounds way too close and too fast per orbit for water to exist on the planets, but both of their stars are smaller and cooler than our sun.

The lead author of Tuesday's announcement said both planets have good chances of being rocky, though another researcher cautioned, "We don't know for sure whether any of the planets in our sample are truly habitable. All we can say is that they're promising candidates."

Up to now, Kepler-186f was the discovery considered most closely resembling Earth. It's only 10 percent larger than Earth, but received far less light than these two more recent discoveries. (Video via NASA)

Kepler's latest discoveries are no small feat, especially when you consider the $600 million mission was supposed to have suffered a fatal flaw in 2013 when scientists lost their ability to aim Kepler's telescope.

Check out this Newsy video from December linked in the text to see how engineers got Kepler back up and running.

This video includes images from NASA / W. Stenzel and Harvard-Smithsonian Center for Astrophysics.