NASA's Juno Just Got Its Closest Look Yet At Jupiter 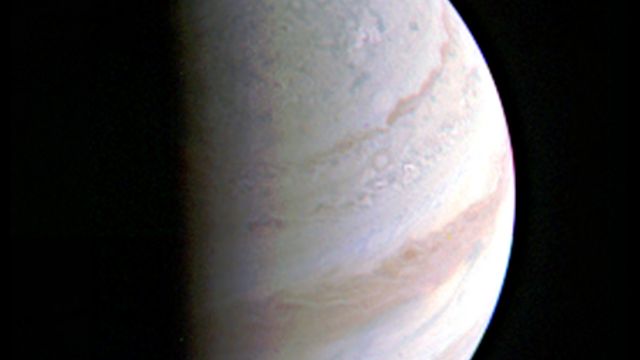 NASA's solar-powered probe just got an up-close look at Jupiter.

On Saturday, Juno made its closest pass yet at 2,600 miles above Jupiter's clouds. It sent back a detailed photo. More high-resolution photos are expected to be released in the coming weeks.

Juno made its way into Jupiter's orbit July 4, nearly five years after it launched. It sent back the first in-orbit photo of the gas planet July 10.

According to a post from NASA, Saturday was the first time all of Juno's instruments were up and running — and apparently things went as expected.

"Early post-flyby telemetry indicates that everything worked as planned and Juno is firing on all cylinders," Juno project manager Rick Nybakken said in a statement.

Juno's mission includes figuring out how Jupiter came to exist, how it has changed and mapping the planet's magnetic field.

We should be getting plenty more close views of Jupiter. Before its mission ends in February 2018, Juno is expected to make 35 more close flybys.