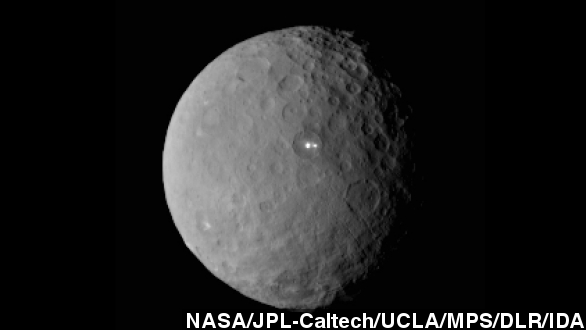 SMS
NASA's Dawn Spacecraft Spots Two Bright Points On Ceres
By Evan Thomas
By Evan Thomas
February 26, 2015
NASA scientists still don't have a clear picture of the bright spots showing up on the surface of Ceres, a minor planet in the asteroid belt.
SHOW TRANSCRIPT

The Dawn spacecraft has spotted not one, but two bright points on the minor planet Ceres.

Newly enhanced images from the probe show two shining spots on the surface. It’s not clear exactly what they are, since we can’t get a closer look.

Ceres is a minor planet in the asteroid belt, between Mars and Jupiter. Dawn is speeding its way toward a rendezvous, but it’s got a way to go. These latest images are from 29,000 miles away.

NASA’s Chris Russell theorizes the two spots might be volcanic in origin, since they both sit in the same crater.

Or, as he tells NBC, they could be ice: especially since “the material reflects 40 percent or more of the light falling on it.”

In any case, the images are a significant improvement over what scientists were working with before. Until Dawn got into range, all they had to go on were low-resolution shots from the Hubble Space Telescope.

Ceres will be Dawn’s second target during its now eight-year mission. In 2011 the spacecraft orbited Vesta, another ancient protoplanet thought to carry clues to the formation of the early solar system.

Dawn is scheduled to arrive at Ceres on March 6.