NASA's Cozy Relationship With Hollywood Is Kind Of A Gamble 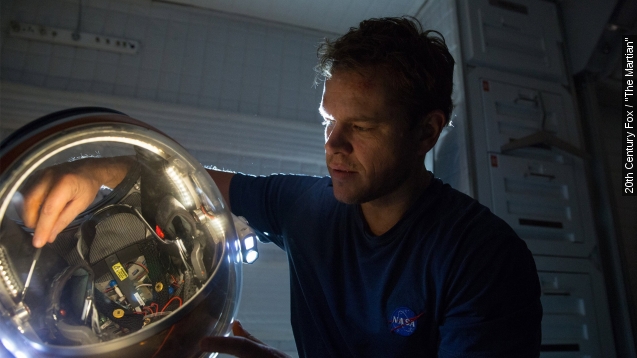 SMS
NASA's Cozy Relationship With Hollywood Is Kind Of A Gamble
By Steven Sparkman
By Steven Sparkman
October 6, 2015
NASA is all but promising a manned Mars mission as it promotes "The Martian." But is the agency setting the public's expectations too high?
SHOW TRANSCRIPT

It's pretty obvious that "The Martian" is basically a two-hour-plus love letter to space exploration and, by extension, to NASA. (Video via 20th Century Fox / "The Martian")

But that's nothing new. The agency has a comfortable relationship with Hollywood. (Video via Paramount Pictures / "Interstellar")

It's gone all-in on promoting "The Martian": sending a team to Comic-Con, hosting Q&A's between the actors and actual astronauts, and, of course, bragging about all the cool technology it contributed to the film.

The promotion goes both ways. NASA gets positive treatment in the film and also gets shoutouts from the actors and director Ridley Scott.

The agency isn't alone here. The Pentagon also lends its technology, expertise and even filming locations to Hollywood. But it's also infamous for insisting filmmakers cast the military in a positive light in exchange for its help. (Video via Paramount Pictures / "Top Gun," Sony Pictures / "Captain Phillips")

Marvel's "The Avengers" famously lost the Pentagon's support and had to rely on CGI and props for its military hardware, all because the Defense Department didn't much care for S.H.I.E.L.D., the shadowy government organization that brings the Avengers together.

Unlike the Pentagon, NASA says it doesn't discriminate when it comes to helping filmmakers. Public outreach is built into the agency's charter, and its only rule is that the film be meant to inform, or at least entertain, and not outright mislead the public. (Video via Warner Bros. / "Space Cowboys," Buena Vista Pictures / "Armageddon")

But it also doesn't have to worry about its image. If NASA is involved in a film's plot, it's a safe bet heroic astronauts and brainy engineers are going to save the day. Even when things go wrong, NASA's on-screen presence is all about triumph. (Video via Warner Bros. / "Gravity," Universal Pictures / "Apollo 13")

There are critics who say the agency's ever-growing Hollywood fame could backfire, though. What if, for instance, NASA doesn't get to Mars? (Video via 20th Century Fox / "The Martian")

A National Research Council report last year said to try to make the mission work with NASA's current budget "is to invite failure, disillusionment, and the loss of the longstanding international perception that human spaceflight is something that the United States does best." (Video via NASA)

The critics later latched on to what looked like a case of lowered expectations for Asteroid Redirect Mission, part of NASA's road map to Mars. It went from an ambitious plan to send humans to an asteroid to a much less impressive plan to have a robot fetch part of an asteroid and bring it to the astronauts. (Video via NASA)

The fear is that the public might stop buying into the NASA hype if a manned Mars mission stays a distant dream. One former NASA official told The Washington Post, "We’re setting expectations for something that is decades away. The public has a short attention span." (Video via 20th Century Fox / "The Martian")

But what NASA can deliver depends on the budget Congress gives it, and that depends on public support. Pew Research Center found that, in NASA's history, "at no time has more than 22 percent of the public said that the U.S. spends too little on space exploration." Maybe the agency hopes that its Mars hype will become a self-fulfilling prophecy. (Video via C-SPAN, 20th Century Fox / "The Martian")