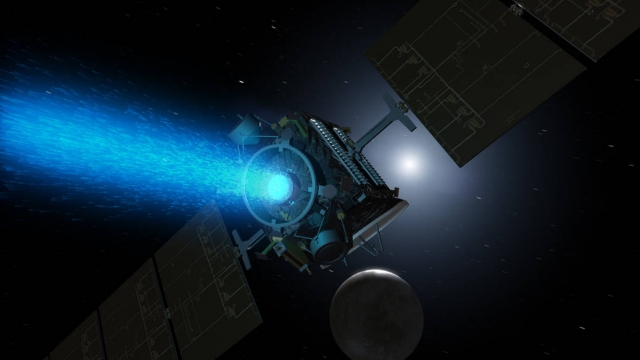 SMS
NASA's Asteroid-Orbiting Probe Might Get One Final Mission
By Ethan Weston
By Ethan Weston
April 23, 2016
NASA's Dawn spacecraft might get a mission extension, but no one is really sure where it would go — if it ever stops orbiting an astroid.
SHOW TRANSCRIPT

NASA's asteroid-hopping probe may not be done yet. Even though its mission is supposed to be over this summer, a team of scientists have asked NASA for an extension.

Dawn launched back in 2007 and spent 14 months orbiting the asteroid Vesta before moving on to its final destination, the dwarf planet Ceres. It's the first craft to orbit two targets in the cosmos.

Vesta and Ceres are considered protoplanets, which are basically baby planets from the early solar system that never formed into the real thing.

Scientists are figuring out why Vesta became a dry rock but Ceres evolved to have water-bearing minerals. They hope further study can give them better insight into the early evolution of the solar system.

Researchers aren't saying what Dawn's next destination might be. The craft only has a little propellant left for its ion drive, which means there aren't too many places it could visit.

But NASA could always end Dawn's mission. If that happens, the satellite will be put into a harmless orbit, abandoned in space forever.