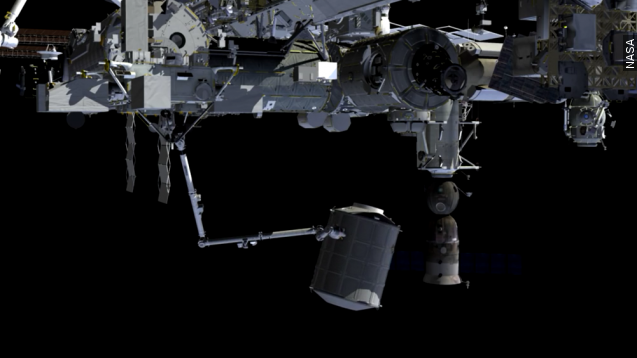 NASA is moving the Permanent Multipurpose Module, or PMM, to a different attachment point on the International Space Station, freeing up more docking space for commercial missions.

Moving the PMM frees up parking space for Boeing and SpaceX, which will need these specific ports when they start flying manned missions. One will be for regular use, and another will serve as a prepared backup in case something goes wrong.

A writer at NASASpaceFlight.com explains the ports make automatic power and data connections when a spacecraft attaches to them. The process is also automatic in reverse, which can save critical time in the event a crew ever has to evacuate. (Video via NASA)

Flight controllers on the ground will execute Wednesday’s mission via robotic arm, so no spacewalks are required. (Video via NASA)

This is the most significant modification to the station’s arrangement since the PMM was first installed in 2011.

It started life as Leonardo, one of the Multipurpose Logistics Modules space shuttles carried to and from orbit during ISS assembly missions. (Video via NASA)

When it was no longer needed aboard the shuttle, NASA left it attached to the ISS to serve as extra storage space.

Preparations for the new arrangement started as early as February. Astronauts performed a number of spacewalks to run power and data connections to new docking ports.

Boeing and SpaceX could start their flights as soon as 2017.