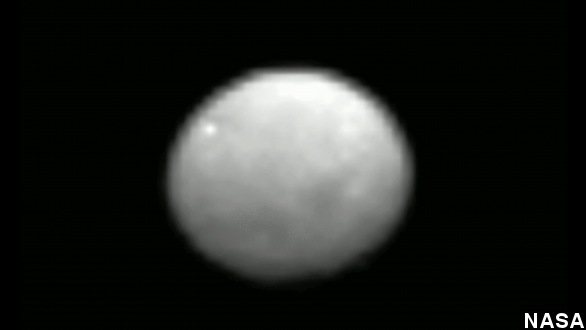 This is Ceres, a dwarf planet about 160 million miles from the Earth, on average, in the asteroid belt between Mars and Jupiter. (Video via NASA)

NASA's Dawn probe is currently rushing toward the dwarf planet at some 450 mph, and it took these images from a distance of 400,000 miles. (Video via NASA)

Why is NASA sending a probe to a dwarf planet in the middle of the asteroid belt? Basically, to learn more about our solar system.

Dawn previously orbited a large, rocky asteroid called Vesta before moving on to Ceres, which is more icy, and NASA hopes by comparing the two, it can better understand how the solar system formed. (Video via NASA)

In that sense — studying obscure celestial bodies to try to gain broader knowledge about the universe — the Dawn mission is pretty characteristic of a lot of NASA's deep-space missions.

Although NASA's missions have always been ostensibly about science and fact-finding, a mission to an asteroid most people haven't heard of is a little harder to sell, politically, than a moon landing. (Video via NASA / CBS)

Which is why it isn't too surprising that a number of lawmakers have pushed for NASA to go back to the moon as a stop on the way to Mars — an idea of Newt Gingrich's that drew attention during his run for the GOP presidential nomination in 2012. (Video via C-SPAN)

NASA leadership and the president are still pushing for another avenue to the red planet through the Asteroid Redirect Mission. That mission would serve as a manned test of the Orion capsule, which NASA hopes to use for Mars missions and a chance to study asteroids by bringing one into lunar orbit. (Video via NASA)

The mission has drawn flak from some Republicans. As The Verge points out, Sen. Ted Cruz is the new chairman of the subcommittee that oversees NASA, and he "may target NASA atmospheric studies with his newly emboldened platform."

For his part, Cruz has said he wants to put the emphasis going forward on manned missions into space and cut back on cooperation with Russia.