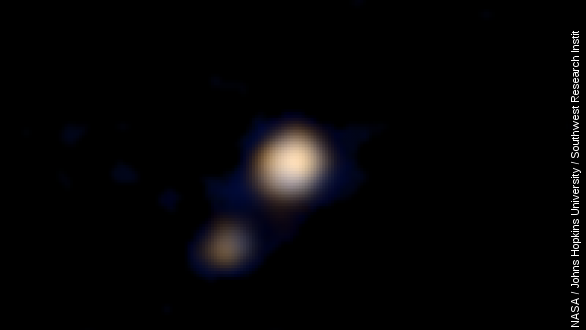 SMS
NASA Probe Captures First Color Images Of Pluto
By Evan Thomas
By Evan Thomas
April 15, 2015
NASA’s New Horizons probe has sent back its most detailed images of Pluto yet, but it’s got a way to go before we see high-resolution images.
SHOW TRANSCRIPT

These blobs represent Pluto and Charon, the largest of Pluto’s moons. New Horizons captured these images from 71 million miles away.

“You can see immediately a number of major differences: Pluto seems to be very bright. It seems to be redder. Charon [in the lower left] is now dimmer than Pluto.”

To be fair, the images aren’t much more than a few pixels at this point. But that’s all we’ve had to go on already. Our best orbital telescopes can’t get clearer pictures.

For that, we have to get cameras closer. New Horizons launched January 19, 2006 — when Pluto was still a planet — to do just that.

It’s traveled longer and farther than any space mission in history to reach its primary target: the probe has spent more than nine years and three billion miles in transit to get out to Pluto’s orbit.

It’s scheduled to arrive on July 14, during which it will take the most detailed images to date of Pluto. NASA says it will get within 7,750 miles; close enough to resolve ground characteristics just a few miles across.

New Horizons’ cameras, spectrometers and dust sensors will swallow as much data as they possibly can during the flyby, and send it home to earth over the course of 16 months following the encounter.