NASA Partners With Nissan To Take Self-Driving Cars To Mars 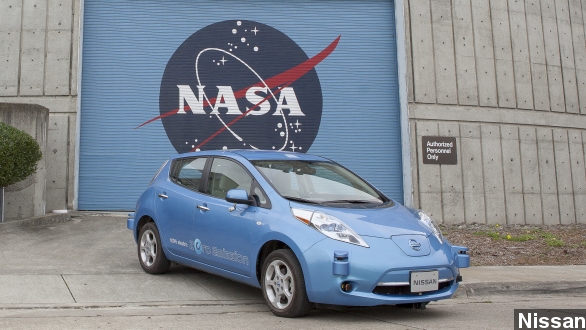 SMS
NASA Partners With Nissan To Take Self-Driving Cars To Mars
By Ben Lawson
By Ben Lawson
January 11, 2015
NASA and Nissan have forged a partnership to develop a driverless car that could operate on Mars.
SHOW TRANSCRIPT

Driverless cars have seen some pretty exciting tests recently thanks to companies like Google, though there are still challenges when it comes to navigating urban environments. (Video via Google)

But now NASA and Nissan are forging a partnership to take autonomous vehicles to a place without pedestrians or traffic to worry about: Mars.

The space agency and automaker are working together to develop and test a modified version of the electric Nissan Leaf that would be capable of traversing the Red Planet — no driver required.

Nissan was already testing a system it hopes will be smart and fast enough to navigate an unpredictable, urban environment. With NASA's help, it will adapt that system to Mars' rocky, desert-like terrain.

Each organization benefits from the partnership. NASA gets to piggyback on Nissan's existing work on self-driving cars, and Nissan gets NASA's help researching and testing.

A NASA researcher told Wired, "The more we look at it, the more there are a lot of similarities there. We have a rover on Mars. It is not very autonomous. As we go deeper into space, into more and more dangerous locations, we need to add that autonomy."

The partnership is scheduled to last five years, after which Nissan hopes to have its self-driving cars ready for the market. No word yet on how or when NASA intends to put the project to use.