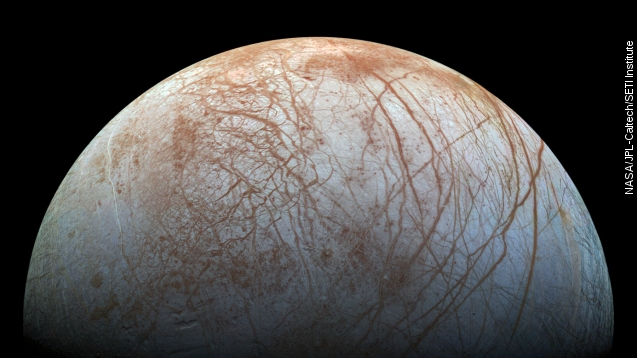 NASA’s planned mission to Europa has passed its first internal review and now enters the stage known as formulation.

This would be NASA’s first visit to Jupiter or its moons since New Horizons flew by on its way to Pluto, and the first dedicated science probe since the Galileo mission wrapped up its tour of Jupiter and its moons in 2003.

Europa is one of the leading candidates for worlds that might support life beyond Earth. The mission, which doesn’t have an official name yet, would send a dedicated probe to investigate Europa’s physical characteristics and evaluate its potential for supporting life. (Video via NASA)

The Galileo mission showed Europa exerted influence on Jupiter’s magnetic field, consistent with conductive fluid beneath the moon’s icy surface. The leading theory now is Europa is covered by a global ocean of saltwater. This new mission’s science payload is designed to explore that possibility.

“Cameras and spectrometers to collect high-resolution imagery, an ice-penetrating radar to measure surface thickness and look for subsurface lakes, and a magnetometer to measure the strength and direction of the moon’s magnetic field.” (Video via NASA)

One problem is the radiation. Jupiter emits high-energy electrons that can damage sensitive equipment aboard space probes.

“Any mission that goes in the vicinity of Europa is cooked pretty quickly. Instead we’re looking at a mission that would orbit Jupiter, make close flybys of Europa, and then zip out of the high-radiation region,” said project scientist Robert Pappalardo. (Video via NASA)

The probe would complete an orbit around Jupiter every two weeks or so, for an expected total of 45 flybys.

It will be a while, though. This early in the process NASA hasn’t even started assembling the spacecraft. A launch isn't expected until sometime in the 2020s.

This video includes images from NASA and music from Jenova 7 / CC BY NC ND 3.0.