NASA Finally Found A Spacecraft It Lost Almost 2 Years Ago 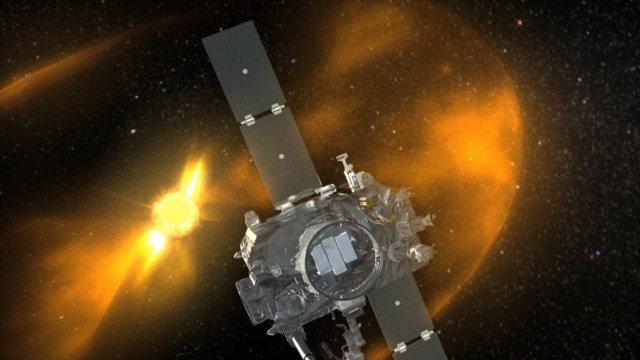 SMS
NASA Finally Found A Spacecraft It Lost Almost 2 Years Ago
By Ryan Biek
By Ryan Biek
August 23, 2016
NASA knew it was going to lose the STEREO-B research probe. Recovering it was the hard part.
SHOW TRANSCRIPT

NASA has recovered a spacecraft that's been missing for almost two years and spinning 189 million miles away.

The craft is known as STEREO-B. It and its partner, STEREO-A, started a mission in 2006 to record the energy emitted from the sun.

To get different angles of measurement, neither spacecraft was set to rotate in line with Earth. And naturally, at some point, one of them would be at the opposite side of the sun compared to Earth.

When that happened for STEREO-B, it was pretty much impossible for scientists on the ground to track a signal. And because the sun emits almost every type of wavelength, scientists couldn't reliably look or listen for any signal. Experts expected this would last for about three months.

Soon after STEREO-B was lost, the scientists got one last weak signal. It showed them they had another problem. STEREO-B wasn't going to be moving like it should.

A computer malfunction was telling the craft it was spinning when it was actually stationary. All the tools the craft would use to stop spinning would, in this case, only make it start spinning. This meant STEREO-B's solar panels wouldn't be trained on the sun as long as they should, leading to a cycle of it dying and charging back up.

STEREO-B needs a certain amount of charge to even send a signal, so at times, the scientists could have been looking in the right area, but because the craft didn't have enough juice, they wouldn't have known it.

On Sunday, NASA finally found STEREO-B, but the craft isn't in the clear just yet. The recovery process could still take years.

Roughly three years from now, the scientists will actually be able to see STEREO-B through the Hubble Space Telescope. With that, they can check how fast it's spinning.