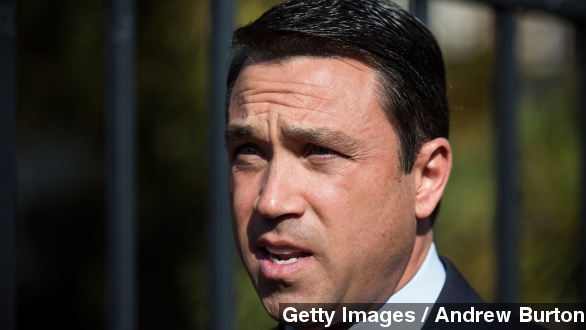 SMS
N.Y. Congressman Michael Grimm To Plead Guilty To Tax Fraud
By Matt Picht
By Matt Picht
December 22, 2014
Rep. Michael Grimm will plead guilty to one count of federal tax evasion after being accused of hiding $1 million from the government.
SHOW TRANSCRIPT

When the indictment was announced, Grimm told reporters "Since day one, the press has been fed all types of innuendos and accusations to support, and let me be very clear, a political witch hunt."

Grimm has been facing a 20-count federal indictment since April. Most of the charges come from Grimm's time operating Healthalicious, a Manhattan restaurant. Prosecutors say he falsified wage reports to conceal at least a million dollars from the federal government.

The allegations have been a sore subject for Grimm, who infamously threatened an NY1 reporter last year for asking a question about them.

It's not clear what Grimm's guilty plea means for his future in Congress. The charge could carry up to three years in prison, but it's possible the judge will sentence Grimm to something more lenient as a first-time offender.

Grimm was recently re-elected to a third term in the House by Staten Island voters, who appeared willing to overlook the congressman's alleged wrongdoing.

Grimm has said in the past he'd step down if convicted and sentenced to jail time.

"I do believe I'll be acquitted, but if I'm not and I'm put in a position where I can't serve, then obviously I would step down."

But the New York Daily News reports, "If he escapes confinement, Grimm is expected to argue that he can continue to hold his House seat despite his guilty plea. ... It would then be up to House Republican leaders to decide whether to force him to step down."

Grimm is expected to formally enter his plea Tuesday at a Brooklyn federal court.