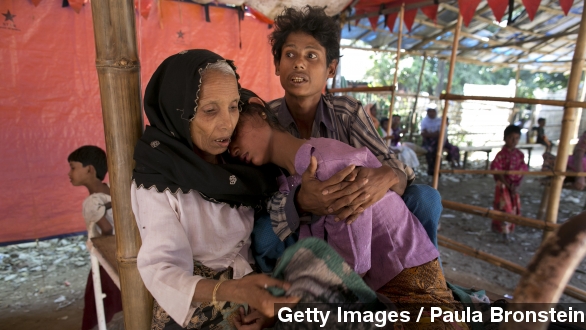 SMS
Myanmar's Rohingya Persecution Hangs Over ASEAN Summit
By Matt Picht
By Matt Picht
November 9, 2014
Myanmar is hosting the ASEAN summit this week, but the emerging democracy continues to oppress its Rohingya ethnicity on a shocking scale.
SHOW TRANSCRIPT

This week marks the 25th formal summit of the Association of Southeast Asian Nations, or ASEAN. Regional heads of state will gather in Myanmar to discuss recent territorial conflicts and trade agreements.

But there's one issue that’s fallen by the wayside of the conference, and of the media in general — Myanmar's ongoing oppression of the Rohingya people.

A Muslim minority group, the Rohingya have been persecuted in earnest since sectarian violence exploded in the country’s Rakhine state in 2012.

Since then, Myanmar’s government has clamped down hard on the Rohingya people, denying them citizenship and forcing them into nightmarish internment camps which lack necessities like basic medical care.

In the face of this persecution, many Rohingya have been forced to flee the country in dangerous migrations which often leave them easy prey for human traffickers.

The Myanmar government does nothing to halt this exodus; in fact, a new report from the monitoring group Fortify Rights suggest the state’s security services profit off of bribes taken from the slavers.

And the Rohingya's situation isn’t getting any better. Activists say a recent policy proposed by the government, ostensibly to allow some Rohingya second-class citizenship, would result in further disenfranchisement and possibly forced deportations.

Myanmar’s treatment of the Rohingya has been repeatedly condemned by human rights groups, as well as the U.N. Yet the nation continues to make inroads into the international community, as sanctions ease and foreign investment pours in.

That’s likely got something to do with this:

PRESIDENT OBAMA VIA THE WHITE HOUSE: "We will extend a hand if you are willing to unclench your fist. And over the last year and a half a dramatic transition has begun, as a dictatorship of five decades has loosened its grip."

Democratic reforms in 2010 saw Myanmar begin the long transition from a totalitarian state into a democracy, freeing political prisoners and paving the way for fair elections. (Video via ABC)

And Businessweek notes the Obama administration was eager to portray Myanmar as an emerging democracy. "If the 'extend a hand' approach worked with former Southeast Asian pariahs like Myanmar, perhaps similar types of U.S. interaction would work with longtime antagonists like Cuba or Iran or Russia."

Given the already-shaky nature of Myanmar’s reforms, the U.S. hasn’t been very vocal about condemning the country’s treatment of the Rohingya.

It’s also unlikely that any criticism will come from within the country, almost 90 percent of which is Buddhist. Myanmar’s main symbol of reform, Nobel Peace Prize winner Aung San Suu Kyi, has remained staunchly silent on the issue despite pressure to speak out.

But the ASEAN conference throws the international spotlight back on Myanmar’s human rights record, and this time Obama might have no choice but to confront the issue

A senior administration official told The Diplomat, the president will pressure the government for "clear commitments to take actions on the Rakhine state," though no major initiatives are expected to be announced on that front.