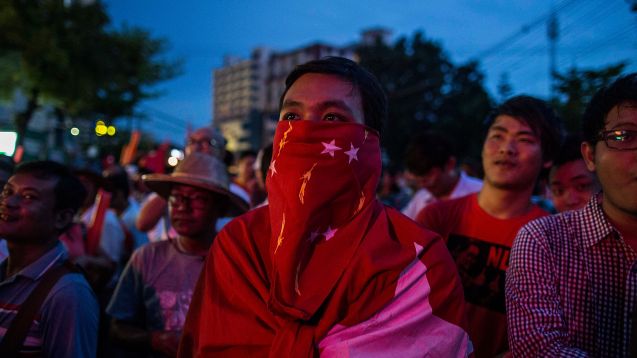 After half a century of military dictatorship, Myanmar could be on the verge of change as  Aung San Suu Kyi and the opposition party favored to win the elections.

Suu Kyi is the leader of the opposition party, The National League for Democracy—also known as NLD. (Video via VOA)

While the NLD is expected to win most of the votes, the party still needs two-thirds of the parliamentary seats to gain a majority— though they could always create alliances with smaller parties.

The ruling party since 2011, the military backed Union Solidarity and Development Party only needs one-third of the votes for a majority. Twenty-five percent of the seats in parliament are already reserved for military generals who are not elected by the people. (Video via PBS)

The current president, Thein Sein, is a member of the ruling party. He says he will respect the turnout of the already violence-free elections.

Even if the opposition party wins the majority of votes, Suu Kyi, known as "Mother Suu" to her supporters, could not be president.  The reason— she has two British sons and the constitution does not allow for candidates to have foreign children.

It is believed this constitutional clause was introduced by the military to keep her away from the presidency. But Suu Kyi won't let that stop her. She told reporters on Thursday:“If we are a win and we reform the government, I will be above the president. It is a very simple message.” (Video via NBC.)

This would not be the opposition party’s first victory. In 1990, the NLD won the elections by a landslide. But the ruling military ignored the results and Suu Kyi was forced to spend 15 of the next 21 years under house arrest.

Although the open election is seen as a step in the right direction for Myanmar, critics say many, including the country's Muslim minority, have been denied a vote. The official results of the election are expected to be announced Monday.