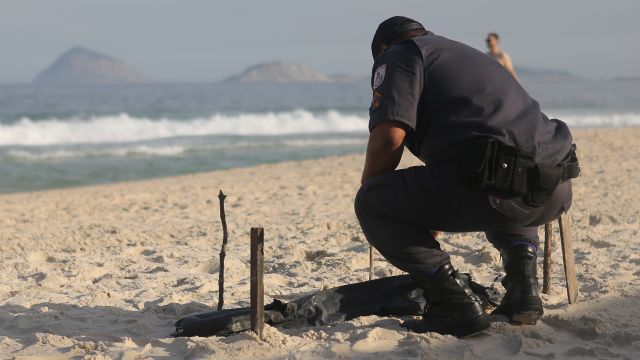 As if the site of the 2016 Summer Olympics didn't have widespread problems already, reports say parts of a mutilated body have washed up on Copacabana beach, an Olympic venue.

Local authorities say a severed foot and other body parts were discovered on the shore Wednesday just yards away from where the Olympic volleyball events are to be held.

CNN reports the body parts are believed to be from a woman or a young adult, though local authorities have said little.

It's still not clear where the body parts are from, but The Independent reports the finding comes shortly after massive gun violence in the city. A high-profile drug trafficker escaped a nearby hospital and there has been ongoing violence since.

Copacabana Beach is one of the Brazil's most iconic beaches. The site holds the world's largest New Year's Eve celebration every year with about 2 million people packing the almost 2.5-mile stretch.

Not surprisingly, the beach is a picturesque postcard of sorts for the Olympic Games.

Aside from violence and Zika virus concerns, the local police force is rebelling, the city is broke and pollution is a huge concern, to name a few problems.

In response, many athletes are skipping the games.

Earlier in the week, Jason Day, the world's No. 1 golfer, said he wouldn't be there.

Still, the International Olympic Committee has been reluctant to change cities and says the Olympics, as scheduled, will take place in August in Rio.

This video includes clips from NBC and Sky News and images from Getty Images.