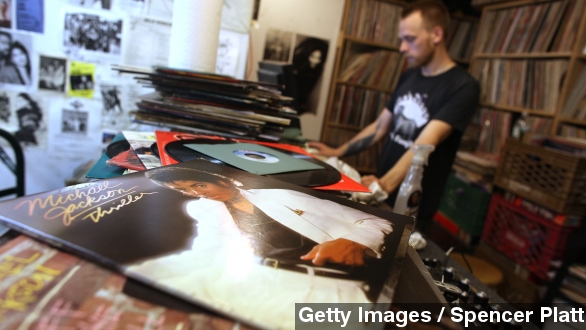 2014 could have gone better for the music industry.

According to Nielsen Soundscan data, paid downloads for albums were down nine percent in 2014, and song downloads were down 12 percent.

Music streaming continues to rise, however, increasing from 106 billion songs streamed in 2013 to 164 billion in 2014.

But even though artists do get paid for streams on services such as Spotify and Pandora, it still likely doesn't fill the gap left by declining music sales.

For instance, Pharell Williams' song "Happy" had 43 million streams on Pandora. That's quite a bit, but Fusion reports the service only paid out about $2,700 in songwriter and publisher royalties for that song.

It wasn't all bad though. Vinyl record sales continued to steadily increase and hit 9.2 million this year, the most since Nielsen began keeping track in 1991. (Video via CBS)

And while that is great for an industry that has experienced declining sales across the board, vinyl by itself isn't likely to solve the music sales slump.

Let's put the sales numbers into perspective. Jack White's "Lazaretto" was the best selling album on vinyl with 87,000 copies sold in the U.S.

Compare that to Taylor Swift's "Shake It Off," which topped the digital and CD sales lists with 3.66 million copies sold. To be fair, Swift drove her sales up by pulling her entire catalog off of streaming sites.

Digital Trends also points out another reason that vinyl isn't the music industry's saving grace. "Existing record pressing machines spent decades sitting dormant or were closed down entirely during the rise of CDs in the 1990s. As a result, no new record pressers have been made since the early 1980s."

So vinyl isn't exactly competing as the top medium in music, but its growth is still pretty impressive for an industry seeing a drop in sales in most other areas.