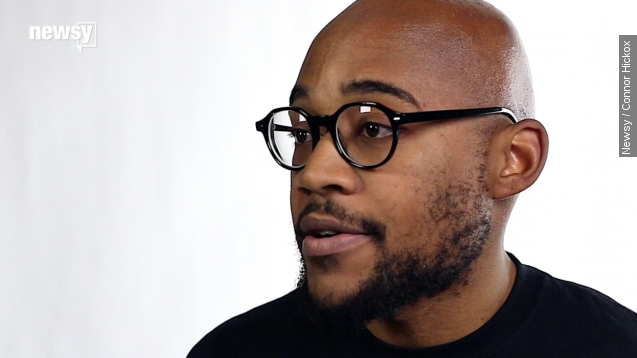 SMS
MU Student Who Went On Hunger Strike Weighs In On Free-Speech Concern
By Jamal Andress
By Jamal Andress
December 1, 2015
Jonathan Butler, the Missouri student protester who went on a hunger strike, gives his take on free speech and the events that happened at the campus.
SHOW TRANSCRIPT

"So I do believe that you grow from, it has a negative connotation, but confrontation. I do believe there's some growth that comes from uncomfortability and confrontation," said Jonathan Butler, the University of Missouri graduate student who went on a hunger strike during protests on the campus.

"I don't agree that you, when you become students at colleges, have to be coddled and protected from different points of view," President Obama has said.

"Do you feel that the president's comments run contrary to your efforts? If not, why?" Newsy's Jamal Andress asked Butler.

"Contrary, not necessarily. I take that within the context of, this is not the first time he's made these statements about specifically higher education institutes and this idea of students being coddled," Butler replied.

"My two principles are dialogue and radical love. Whether we agree or not, we need to talk this out, talk it through, and I gain something, you gain something. But you also have to do it with radical love, understanding that you may say something really offensive to me, but I have to love you through that and still work with you, understanding that we're going to have differing views.

"If I'm just walking on the subway, I can't just like, 'Hey, you over there, stop,' you know? I don't have the authority to police someone else in that space. In this environment, in this higher education institute, you can have a different opinion from me, but you're signing on to say it in a respectful manner.

"When we got the announcement that Tim Wolfe was resigning, I was actually on a phone interview with CNN. From my understanding, that space was just to have a space for open dialogue. So people from all different backgrounds, white, black, Latino and otherwise, could have difficult dialogue. Because you wanted that difficult dialogue, which talking about race, sexism, it's hard sometimes, as well as the idea that people are traumatized by this situation. We have people on Yik Yak saying, 'I'm going to  come to school and murder all black people,' and how you process through that. So the idea being that just have a space where people can have that and be protected from being exploited or exoticized was the idea.

"Being a public space, being a land-grant institute and how this all works, again, it's a growing experience, right? They decided to take the spaces down but still request that media respect the space, and I think that's what it boiled down to. As students we're not trying to be like, 'You don’t agree with me; you're too conservative or you're too liberal,' that was never the intent. The intent was to just have a space where students could feel comfortable sharing stories with each other because that's how you grow."