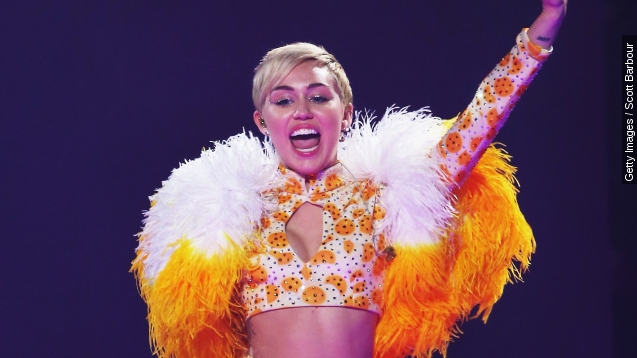 The pop star made the announcement by posting this dual-image to all of her social media platforms. In the first pic, she's wearing a sign that says "MTV won't let me perform." "So I'm hosting this year's VMAs," her sign says in the second photo.

So exactly how good of a host will Cyrus be?

One thing we're sure of is she will be seeking plenty of media attention.

After all, she was the one who gave that twerk-filled performance with Robin Thicke at the 2013 awards.

"Hopefully this is the best VMA performance of all time. But that's the standard I'm setting," Cyrus told an MTV reporter during rehearsals for the 2013 awards show.

Whether you thought the performance was "the best of all time" is sort of irrelevant.

Especially after how the media responded to it.

But Cyrus embraced all the attention — the good and the bad — by tweeting, "My VMA performance had 306,000 tweets per minute. That's more than the blackout or Superbowl!"

After that came her "Wrecking Ball" music video and her Bangerz tour, which prompted a writer for The Hollywood Reporter to announce: "Hannah Montana is officially dead."

Even when Cyrus won Video of the Year at the 2014 VMAs, she made headlines by sending a homeless man named Jesse up to accept her award.

The stunt got even more attention when Jesse was sentenced to six months in jail soon after. Us Weekly reports he'd violated his probation after breaking into an apartment in 2010.

But we're thinking Cyrus' antics are probably why MTV asked her to host in the first place.

After all, one of MTV's reporters did write, "Miley has practically adopted 'WTF' as her middle name, so we can all just sit back and enjoy the predictably crazy antics she has in store this year."