MTV Attempts To Talk About Race From White Perspective 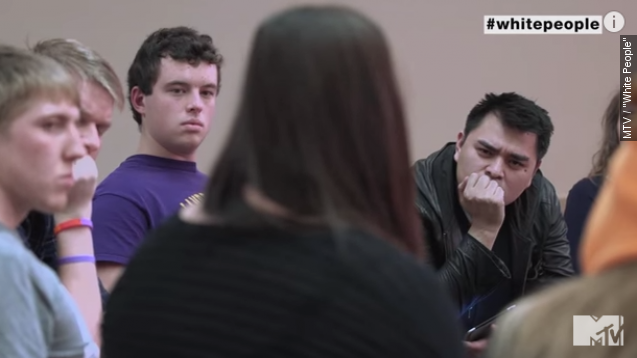 MTV's "White People" was always meant to start a conversation, but the channel probably didn't intend for that conversation to be about all the documentary's flaws.

"For me, this film has been brewing since I arrived here," said "White People" director Jose Antonio Vargas.

Filmmaker Jose Antonio Vargas, an undocumented immigrant from the Philippines, wanted to start a conversation about how white people felt about racism in America.

"Hey! This is great. Let's all get uncomfortable together."

One of Vargas' big claims as a documentarian is that he isn't afraid to make people uncomfortable.

But a lot of critics say that awkwardness didn't actually lead to meaningful discussion.

A writer at The Guardian believes Vargas doesn't live up to the claim, with the people in the documentary having a one-way discussion about race without anyone challenging their beliefs.

NBC does give the documentary some credit for providing "a rare and compelling perspective" on what white people say it means to be white.

And some praise how Vargas challenged one view when he demonstrated to a white college student that most scholarship money at her university does not actually go to minorities.

But others have speared that same scene for almost going too far to apologize for that student's point of view.

Then there are situations where critics say black people essentially feel like props. EW writes, "It's hard not to resent Vargas for dragging a black woman into a potentially painful situation just so she can educate Dakota’s white friends."

The one thing critics agree on is that Vargas is good at letting conversations between people happen naturally. It's just a shame those conversations didn't actually lead viewers anywhere.