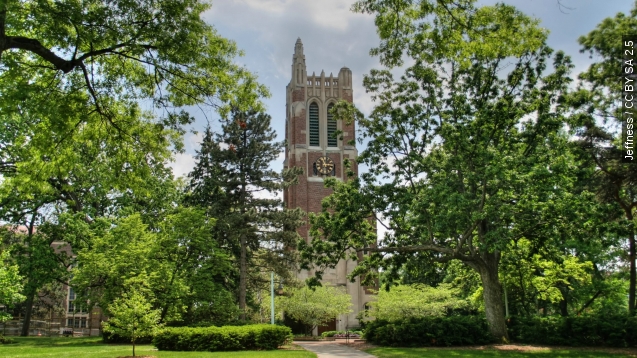 Two of the women came forward in a press conference Wednesday. "Michigan State University's investigation process has caused me harm and delivered me no justice," Shayna Gross said.

The keys to the case here are Title IX regulations. In 2011, the Office for Civil Rights provided guidance that universities should respond "promptly and effectively to sexual violence against students." The women claim their investigations fell far short of that. To be clear, the OCR says it doesn't require that the investigation be finished in any specific time frame but says 60 days is typical. (Video via Michigan State University)

But according to the lawsuit, MSU's official sexual assault policy at the time of the alleged assaults said investigations should be completed "within 90 days of the formal report."

MSU has already been investigated for this exact same thing, violating Title IX for not promptly investigating two sexual violence complaints. The OCR made recommendations for MSU to meet so it would be in compliance with the law. And in September, the school signed a resolution saying it had made changes to correct the concerns. (Video via Michigan State University)

For its part, MSU released a statement saying it doesn't "comment on pending or potential litigation" but takes all cases of sexual misconduct seriously. (Video via Michigan State University)

This video includes images from Jeffness / CC BY SA 2.5.