MS-DOS Video Games Get A New Home On Internet Archive 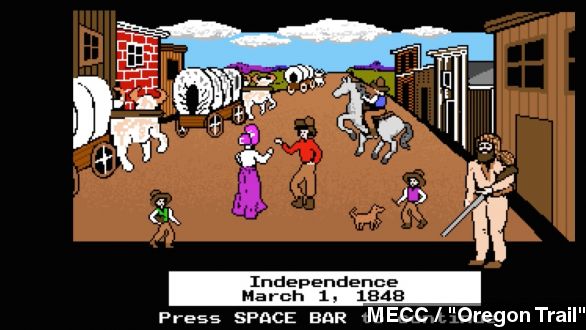 Sure, the 3-D graphics of "Halo" are spectacular, and a "Call of Duty" narrated by none other than Frank Underwood is awesome.

"You give them that and they'll follow, and that's where I come in," his character says.

But if you're like me, sometimes you just want to run while Donkey Kong hurls whatever he can find your way. (Video via Nintendo / "Donkey Kong")

Which brings me to the Internet Archive and its brilliant addition of more than 2,300 MS-DOS, old-as-dirt 2-D games.

MS-DOS, or Microsoft Disk Operating System, was an operating system used on computers before Microsoft Windows came along, which makes it and theses games anywhere from 14 to 33 years old. (Video via Capcom / "Street Fighter")

From "Oregon Trail" to the original "Prince of Persia," the Internet Archive has stored these relics for the ages and — perhaps more importantly — made them all playable in your browser.

The collection of games comes from Jason Scott, who wrote on his personal blog about the new games, "This is still brand new territory, and with the addition of the MS-DOS programs so far, this no-plugin in-browser experience is one of a kind in the world."

The Internet Archive is best known for its Wayback Machine, which sort of serves as an Internet time capsule where you can see what Web pages looked like decades ago.

The virtual time machine is live and ready to take you back to your childhood as well as put you off task for hours at a time.

This video includes an image from pinguino k / CC BY 2.0.