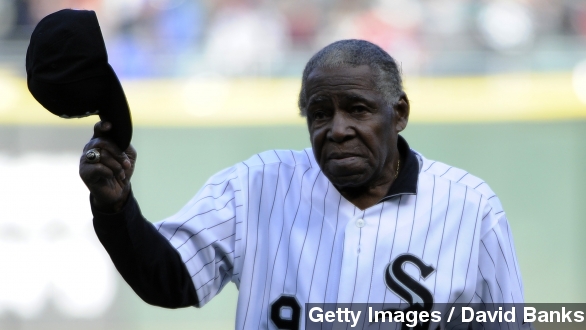 The White Sox confirmed the news on Twitter, writing, "Tears of sadness are falling for a great man."

Minoso played 17 seasons in the Majors — 12 of those with the White Sox. He also had stints with the St. Louis Cardinals, Cleveland Indians and Washington Senators.

The outfielder made his Major League debut in 1949 with the Indians — a few short years after Jackie Robinson crossed the color line. Nicknamed the "Cuban Comet" and "Mr. White Sox," Miñoso earned seven All-Star appearances and three Gold Gloves during his decorated career. (Video via el Nuevo Herald)

In a profile last year, when Miñoso was up for the Baseball Hall of Fame Golden Era Award, Sports Illustrated described him as "a dynamite all-around ballplayer, a speedster with an excellent batting eye and considerable pop."

Despite the lengthy resume, Minoso was never selected for the Baseball Hall of Fame — something that always irked him.

He told ESPN in an interview posted Friday, "Truly, I'm hurt. ... I've seen so many guys -- and all of my respect is for them -- get inducted (into Cooperstown), but my records are better. And I played more years. That's what's breaking my heart."

Minoso's age is unconfirmed, with some reports saying 89 years old and others up to 92. As of Sunday morning, the cause of death had not been released.