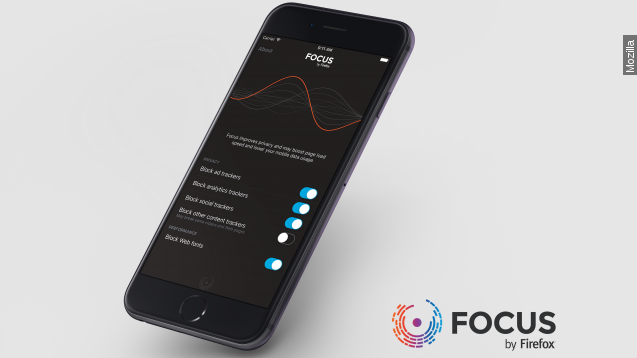 Mozilla launched a new app for iOS Tuesday called Focus by Firefox, and it only works with Safari. (Video via Mozilla)

That's because Safari is the only Web browser Apple supports ad blocking with in iOS 9. But Focus isn't actually an ad blocker. (Video via AdBlock Plus)

Focus is a "content blocker," which means that ads can get through but only if they meet certain standards that you get to set.

So, if you're not a fan of being tracked by advertisers, you can choose to only block the ads that try to collect your data.

That way the apps that aren't tip-toeing any privacy lines still see the light of day and the organizations displaying free content still get paid for their efforts.

The app uses a well-curated, publicly maintained list from anti-tracking startup Disconnect to decide which ads need blocking and which don't.

Mozilla writes, "We want this product to encourage a discussion about users and content providers, instead of monetizing users' mistrust and pulling value out of the Web ecosystem."

More plainly stated, the aim of Focus is to encourage advertisers to respect Web users. So a party can have its name removed from the list — that is if it stops tracking.

Like other apps, Focus can speed up how quickly Web pages load. Just be aware that depending on how severely you choose to block pages, you could end up breaking some sites completely. (Video via Disconnect)