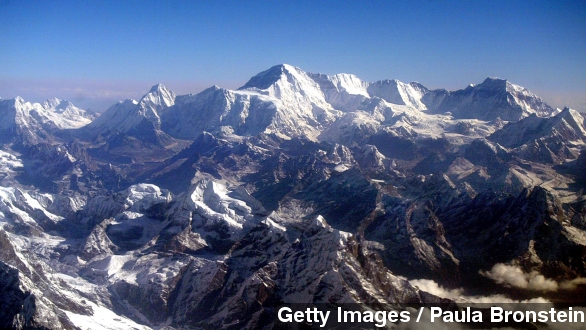 Mount Everest's two-month climbing season started this week, and with it come the almost yearly warnings about nasty amounts of human waste on the peak.

Since the mountain was first scaled in 1953, it has been climbed by more than 4,000 adventure seekers. But those 4,000 people have left behind lots of garbage — even poop.

Last year, a Nepali committee started a safety deposit system to fight this problem. Climbers pay a $4,000 deposit on top of all the other costs to climb. If they return with 18 pounds of trash, they get their money back.

But just trash pickup hasn't been enough to take care of Everest's "pyramids of human excrement," as one climber described the problem in National Geographic. The camps and mountain don't have any electrical, sanitation or water systems.

Instead, at base camps, climbers use outhouse-like structures, and then porters carry that waste to a dumping spot in a community down the mountain. Each year, they carry an estimated 12 tons of poop to Gorak Shep, a frozen lakebed and tiny village.

When they're actually climbing the mountain, some climbers have toilet bags, but many go into crevasses in the ice, which is a bit of a problem considering all of that waste comes back down the mountain eventually.

Water studies have been conducted at Gorak Shep. The studies found high levels of human contaminants in most of the drinking water supply.

One of the obstacles to water and sewage treatment is that the ground and air temperatures at Gorak Shep are below freezing most of the year, and building supplies would have to be carried on the backs of animals or porters for five to six days to reach the mountain community.

And some of the base camps sit on ice that is constantly moving and melting, which makes installing a plumbing system almost impossible.

A Nepali official told reporters these levels of contamination could spread disease and endanger Everest climbers and Sherpas.