Moths Invaded Euro 2016 Because Someone Left The Lights On 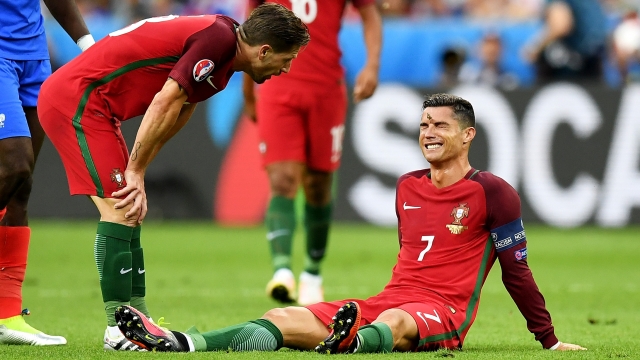 SMS
Moths Invaded Euro 2016 Because Someone Left The Lights On
By Matt Moreno
By Matt Moreno
July 11, 2016
The moths drove the players mad but gave viewers some entertainment during what was a goalless game until extra time.
SHOW TRANSCRIPT

OK, so it wasn't quite that intense, but Euro 2016 was invaded by a ton of tiny (and annoying)  insects.

There were moths everywhere on the pitch Sunday when Portugal took on France for the Euro 2016 title.

Not surprisingly, it drove the players mad, but it gave viewers some entertainment during what was, for most of the match, a 0-0 game.

"For about 115 minutes of the game, the moths were the most exciting thing about it, I think," a Sky News host said.

And it all happened because the flood lights were left on overnight, reportedly for security reasons.

See, moths, like many other insects, use the moon and stars to navigate. It's a behavior called transverse orientation.

When they come across artificial light, researchers believe it confuses them and they fly toward that instead.

So when you leave the flood lights on at a massive stadium, you better believe you're going to have a few extra visitors sticking around for the must-see event.

The pitch invaders didn't seem to bother Portugal too much, though. Cristiano Ronaldo and the gang beat France 1-0 in extra time to win the country's first European Championship.

This video includes clips from BBC and the Chicago Botanic Garden, and images from Getty Images.