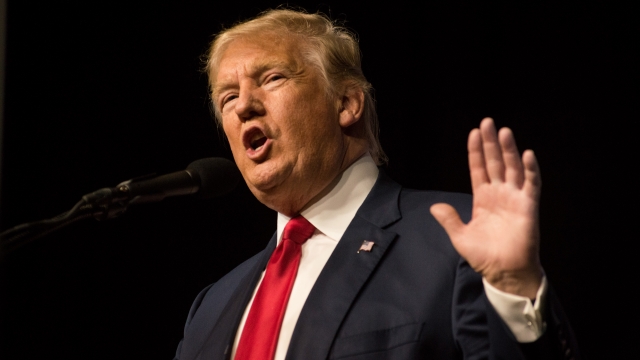 SMS
The Mother Of A Deceased Military Veteran Has Some Words For Trump
By Briana Koeneman
By Briana Koeneman
October 4, 2016
Stephanie Keegan penned a powerful op-ed in response to Donald Trump's comments about military veterans and PTSD.
SHOW TRANSCRIPT

The mother of U.S. military veteran who died after battling post-traumatic stress disorder has something to say to Donald Trump.

Almost immediately after Trump said that Monday at an event hosted by a retired veterans group, many accused him of suggesting soldiers with PTSD "couldn't handle" combat.

But Stephanie Keegan took it a step further with a powerful op-ed about her son, Daniel, who died earlier this year.

She wrote, in part: "The grace and courage that he showed in his service and after returning home while fighting the demons of war should not be belittled by those who do not understand. ... For Donald Trump to say that PTSD is an indication of weakness is absurd and ignorant."

She went on to say, "I would love to meet him [Trump] and show him the face of a brave and beautiful young man who died way too soon because he tried to make the world a better place."

His son, Beau, served in Iraq with the Army National Guard.

"This is an ignorant man. This guy says things he has no idea about. He's not a bad man. But his ignorance is so profound. So profound," Biden told CNN.

But the Marine staff sergeant who asked Trump the question says he feels differently.

According to a press release on Trump's campaign website, he said, "I took his comments to be thoughtful and understanding of the struggles many veterans have, and I believe he is committed to helping them."