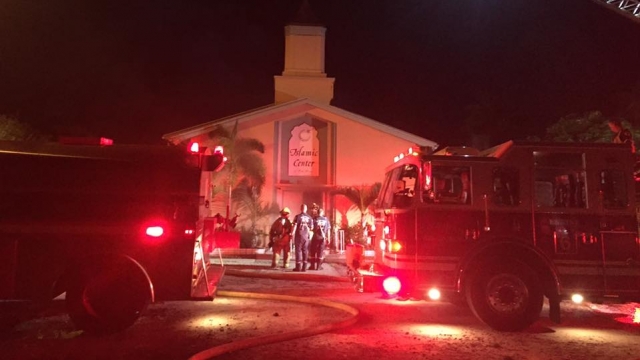 SMS
The Mosque That The Pulse Nightclub Shooter Attended Was Set On Fire
By Briana Koeneman
By Briana Koeneman
September 12, 2016
Emergency responders were able to put out the blaze, but not before it caused significant damage to the back of the mosque.
SHOW TRANSCRIPT

This is the Florida mosque that the Pulse nightclub shooter regularly attended before he killed 49 people and wounded dozens more.

It caught fire early Monday morning, and officials believe an arsonist is to blame.

According to Newsy's partners at WPTV, the St. Lucie County Sheriff's Office was called to the Islamic Center of Fort Pierce around 12:30 a.m. local time.

Emergency responders were able to put out the blaze, but not before it caused significant damage to the back of the mosque. Police say no one was inside at the time.

Many of the details surrounding the incident are still unclear, but the sheriff's department says they're considering all possible motives.

Local media outlets were quick to point out the fire coincided with the 15th anniversary of the Sept. 11 terrorist attacks and the beginning of the Muslim holiday of Eid al-Adha.

But mosque leaders say they started receiving threats not long after the Pulse nightclub massacre in June.

Authorities say they have surveillance video from the mosque that they will release to the public in an effort to identify the arsonist.