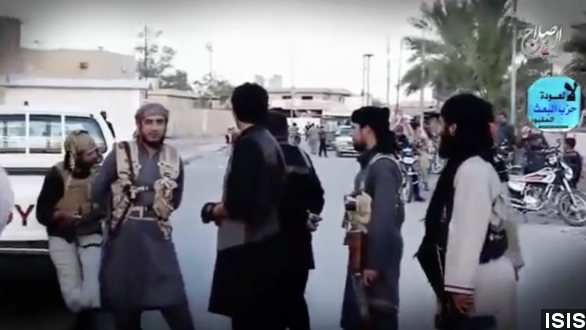 Over the past year, the militant group ISIS has made a strategy of recruiting westerners. U.S. law enforcement officials have made efforts to thwart that system — and they've had their hands full lately. (Video via Youtube / ISIS)

The Washington Post reported Wednesday federal officials took a 17-year-old Virginia high school student into custody over the weekend who they believe helped recruit another older person to join ISIS.

The Post says: "The teen helped arrange the man's travel, in part by using online contacts that led to the Islamic State overseas." (Video via Vice News)

On the same day, federal agents also indicted a 21-year-old California man who was arrested last year for attempting to use a fraudulent passport to travel overseas and join the militant group. (Video via KTLA)

Director of National Intelligence James Clapper said Monday roughly 180 Americans have left the U.S. and traveled to Syria to fight alongside ISIS — only about 40 have come back.

ISIS has relied heavily on social media to attract new recruits, especially young people. But at least one of those social media networks is fighting back.

Twitter reportedly recently suspended more than 2,000 accounts related to ISIS, as the company does not allow its users to post violent threats. (Video via RT)

ISIS responded to that crackdown Monday. The group threatened to wage a "real war" on the social media giant.