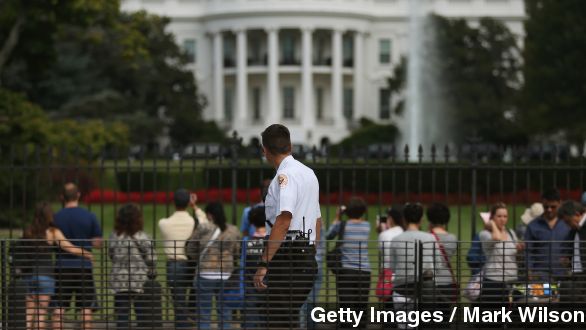 The Secret Service has faced plenty of media scrutiny for its fumbled response to recently accused White House intruder, Omar Gonzalez. And now the Department of Homeland Security has unloaded on the agency as well.

A DHS review released Thursday criticizes the level of training and staffing of its agents around the White House perimeter and claims the agents didn't communicate properly on their radios. It also says one agent — who they say could've stopped the accused intruder with an attack dog — was talking on his cell phone and didn't have his radio earpiece in when Gonzalez hopped the fence. (Video via WJLA, HLN)

Also, according to the report, Secret Service agents believed the bushes lining the North Portico were "too thick" to get by, so they were surprised Gonzalez made it through.

New York Times correspondent Michael Schmidt reports this highlights a series of "blunders" and created quite a bit of confusion at the White House front doors.

NEW YORK TIMES CORRESPONDENT MICHAEL SCHMIDT VIA MSNBC: "He saw this guy coming up the steps, he saw people chasing, he said, 'Well, I'm going to get out of the way because the door's going to be locked.' And then the intruder opened the door and went right into the White House. ... Everything went wrong."

Schmidt says some agents even knew Gonzalez could pose a potential threat, as this wasn't his first run-in with White House security.

NEW YORK TIMES CORRESPONDENT MICHAEL SCHMIDT VIA CNN: "Officers who knew him from a previous incident where they saw him with a hatchet on his belt walking around the White House recognized him but they said he wasn't exhibiting any odd behaviors."

Not to mention, as ABC point outs out, Gonzalez has had other run-ins with the law outside of the White House area that could've tipped off security to a possible altercation in D.C.

ABC: "Omar Gonzalez allegedly tries to evade police after driving erratically. Authorities discover an arsenal in his vehicle. ... Virginia State Police discovered a map of Washington D.C. with a map drawn to the White House."

As far as reaction to the report goes, representatives from both sides of the aisle were critical of the beleagured agency as well.

The Republican chairman of the House Judiciary Committee called the event a "comedy of errors" and a Democratic congressman said, while technical problems are partly to blame, there may be a more systemic problem with the Secret Service culture at play.

Former Secret Service director Julia Pearson stepped down from her post within weeks of the Gonzalez incident. The agency says it has committed to addressing the problem to prevent future break-ins.