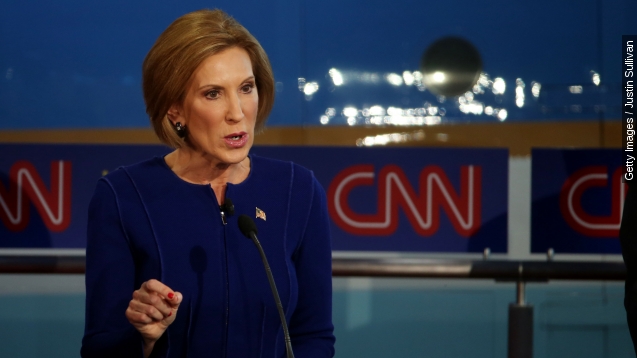 Before the latest Republican debate, there was skepticism about how much it would help any of the candidates, but it's been huge for one: Carly Fiorina.

Her performance in the CNN debate has helped her leapfrog Ben Carson into second place, according to a CNN / ORC poll.

"I think women all over this country heard very clearly what Mr. Trump said," Fiorina said during the debate.

While poll numbers this early can be unreliable, Fiorina's confident, assured delivery was one of the biggest takeaways from the debate.

Fiorina's arguments relied on specifics, contrasting sharply with the man above her in the polls: Donald Trump. (Video via C-SPAN)

But those arguments drew criticism from fact-checkers.

"Fact checking her right now is like a three-alarm fire," Rachel Maddow said on MSNBC.

"We doubled the size of the company, we quadrupled its top-line growth rate," Fiorina said during the debate.

"It was a really dysfunctional company ... six of the next 10 CEOs lasted about a year," reporter Liz MacDonald said on Fox Business.

To this statement about the notorious Planned Parenthood video. (Video via CNN)

"A fully formed fetus on the table, its heart beating, its legs kicking," Fiorina said during the debate.

"There was no actual footage of that procedure. There was intercutting videos of a fetus from an organization that provides stock footage of abortions," The Washington Post's Glenn Kessler told Bill O'Reilly.

The added prominence the debate has given Fiorina could mean more scrutiny on her facts.

"When you do start getting a lot of attention, you can't be as wrong as she is as frequently as she is," Maddow added.

And considering how front-runner Trump's disregard for facts may now be costing him — dropping 8 points from earlier this month — a little fact checking may go a long way. (Video via The Wall Street Journal)